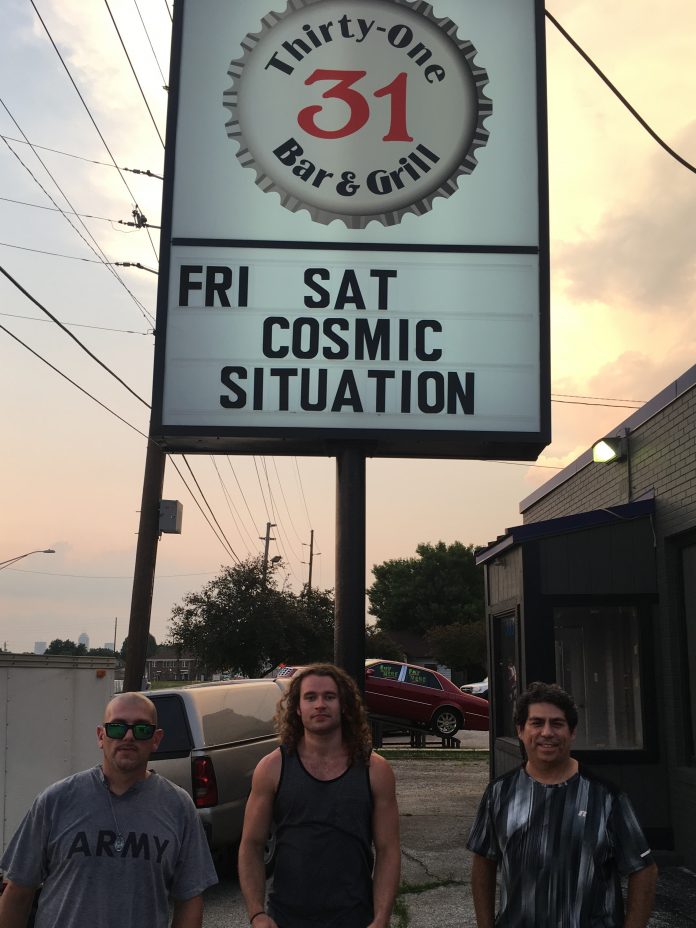 After my interview with local rapper Chef Squid on Saturday afternoon, I learned that the young aspiring artist also managed to land a job with us here at Lemonwire as an on-camera interviewer.

We got to talking over another beer, and came up with the crazy idea to cover as many shows as we could that night. There was a strange energy in the air as we talked about the even stranger idea of showing off the variety of music to be found in Indy on a single night. This is the story of that night.

After scouting around for available shows to cover, we eventually settled on three solid venues. A friend of Squid’s was playing a show with his band, Cosmic Situation at 31 Bar and Grill, which was starting off early. The Hi-Fi was bringing Chris Shaffer and The Why Store to Fountain Square for a two set performance that ran until 11:00 pm. And The Melody Inn was hosting another Punk Rock Night, the latest show of the night.

We stopped at The Hi-Fi first, to pick up our press badges at 8:00 pm. Chris Shaffer and The Why Store were still in the process of setting up, and there were maybe a dozen people in there besides the two of us. We talked to the production manager, to see if we could secure a quick interview with Chris before the show, but were told that we’d need to wait until after they played.

It was a small bump in the road, but one short-lived. After checking the time, we noticed that Cosmic Situation would be taking the stage within the hour. So we hopped in the car and drove down to 31 Bar and Grill, a few minutes south of Fountain Square. If we hit them first, we could be back at The Hi-Fi in time for The Why Store’s second set.

31 Bar and Grill sits on the side of Shelby Street, out of the way of pretty much everything. When we pulled into the parking lot, I found myself wondering how many people would bother to show up for a show at this small, run-down place. Dilapidated is too strong of a word to use for the state 31 Bar and Grill is in. It’s really a fine establishment. Just a little rough around the edges.

We met the members of The Cosmic Situation as they were unloading gear from their truck. Lead singer and guitarist Brandon Boerner had a beat up Fender Stratocaster slung around his neck. Boerner was dressed in a tank top, and his wild mane of hair fell over his face as he leaned over the body of the guitar. He was in the process of changing strings as Squid and I approached him.

After agreeing to the interview, the band came out and we spoke right there in the 31 Bar and Grill parking lot. They were all friendly, charming, and had a lot to say about their experience as a band. Keep your eyes open for the full interview with Chef Squid to come.

The inside of 31 Bar and Grill was small, but cozy. The main room was filled with tables and chairs surrounding the stage. A lone pool table and a couple dart boards were being ignored by the patrons, who all waited patiently for the band to set up.

I wasn’t sure what to expect from The Cosmic Situation. I was there only because Squid had this connection, and I hadn’t done any research on the group. From the looks of the small venue and lack of crowd, I wasn’t expecting to be blown away. But I suppose no one ever is.

The Cosmic Situation infuses heavy soul, jazz and blues into their own rock and funk-driven sound. They kicked things off with a cover of Jimi Hendrix’s “Purple Haze”, and I was pleasantly surprised and impressed by how spot on they were. When Boerner launched into the solo, he nailed it note for note. It was then that I first wondered why such a talented group was playing such a small show.

The band played a few more covers, mixed in with some originals. But I still didn’t get an answer to my question. I’d seen worse bands open at The Hi-Fi, and get more publicity than they probably deserved.

It seemed like a cruel joke, to find this hidden gem playing at a run down bar on the side of the road. In my eyes, they deserved a larger platform. They were making good music that deserved to be heard.

As I came to this realization, another came riding in on its coattails. The time. Squid and I had to get back to The Hi-Fi to catch the Why Store’s second set. And there was still The Melody Inn and Punk Rock Night to go. The night was just getting started.

Other Animal brings new life to jazz by using elements of...