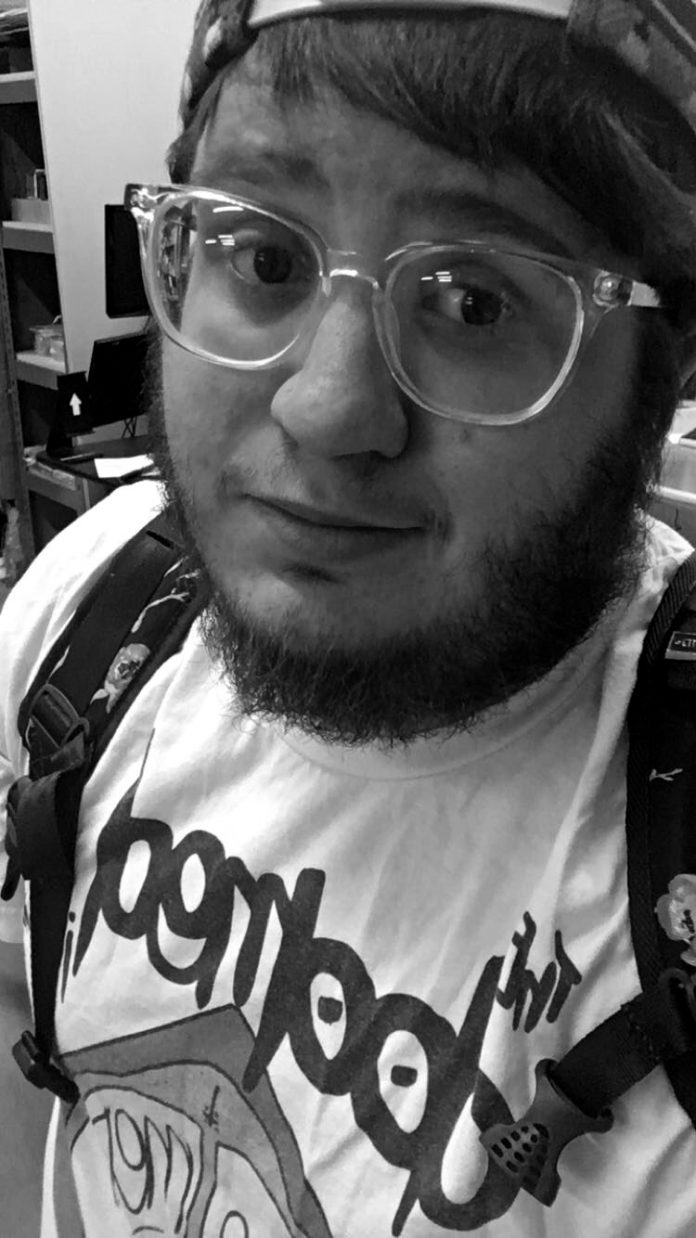 Last Saturday, I had the pleasure of meeting with local Indianapolis rap artist Chef Squid. To be perfectly honest, I wasn’t sure what to expect. What little research I’d done proved for the most part unfruitful. I found his Instagram and Twitter profiles, and a handful of songs available on Spotify. Other than that, Chef Squid was a mystery to me.

As he walked over to the table where I was sitting at World of Beer, I got my first look at the man. He looked young, and dressed fashionably in a baseball jersey, with a snap back on his head and a pair of shiny, chrome sneakers on his feet. A short beard framed his big grin with what looked like two to three weeks of growth.

As he sat down, Squid removed his backpack, which sported a brightly colored, ode to Pac-Man design. When I commented on it, it was almost as if he had a follow-up response ready to go.

Lemonwire: That’s a cool backpack. What is it, Pac-Man?

Chef Squid: Yeah, it’s an exclusive. Spraygrounds and Odd Sox are two brands I definitely support. I’m all about supporting little brands and artists. I was talking to this entrepreneur the other day who was saying, you’re not gonna hit the next big thing, everything’s already been invented. Okay, well you might not create something new, but you can create something awesome, and be elevated up.

It’s like with music, you know. I’m more into the lo-fi, chill scene. With these local artists, you don’t see them throwing jabs out. That’s just not what you’re doing. It’s all about good vibes, you help me, I help you. Like little businesses.

LW: So, how long have you been making music?

CS: I’ve been making music since, honestly since I was six years old. I remember there was a Martin Luther King talent show, and my mom wrote the lyrics down for me, and I rapped it. I was real big into Will Smith as a kid. “Gettin’ Jiggy With It”, and all that. That was me.

LW: If you could collaborate with any musician, dead or alive, who would you choose?

LW: Sure. How about one of each?

CS: One of each, okay, okay. This is actually really tough. Probably alive would be MF Doom. His flows are just amazing. “Rhymes Like Dimes”, and then he brings the superhero aspect. But that’s just for the hip hop scene.

So Dead. Wow. That is really, that’s a tough one. I want to feel like I’m a modern day Jim Morrison, but without all the crazy stuff. I’d like to hear what his mind has to say. So being basic, probably Jim Morrison. But there are a lot of artists that I’d like to pick their brain.

LW: Would you say they’re some of your main influences?

CS: In hip hop, MF Doom and Will Smith are my two hip hop influences. Others are you know, Bob Dylan, Neil Young. And some of my other, I don’t want to say R&B, but they’re kind of Frank Ocean inspired. So I’ll listen to him. I’ll listen to music like how basketball players study film. I’ll study music. What’s their structure, what’s the message they’re trying to convey, who’re their influences?

LW: So you mentioned listening to music from a very young age. Is there any band or artist who you still listen to that you’d consider a guilty pleasure?

LW: And really, no one should feel guilty about what they listen to, no matter what it is.

LW: What about anything outside of music? Hobbies, interests?

CS: I’m a big baseball fan. Got the jersey on right now, obviously. So yeah, baseball’s a really big hobby of mine. And if this music thing ever picks up, I’d love to throw the first pitch in a baseball game. What I’d really like to do, is find a bullying program like Big Brothers Big Sisters, find a kid that’s been bullied, and have both of us throw the first pitch together.

My album artwork for “Odd Life” is a home plate, cause home is where we want to be. We’re all out lost in this world, and we gotta find our own home, you know? I don’t want to get big and lose touch with where I came from.

LW: Do you consider Indianapolis your home?

CS: Oh yeah. Born and raised here. So if the music did take off and I relocated, say I love that city, obviously that would be home for the time that I’m there. But yeah, Indy’s the city that raised me. And while I don’t agree with everything about it, I’m not gonna get too political here. But yeah, Indy’s my home, but I think the city of Indy could do better in a lot of ways.

LW: Has there been a defining moment so far in your career that you still look back to, or still has meaning for you?

CS: Probably when I first put myself on Spotify. That’s still a moment for me. It was like, wow, it’s out there, and anybody can see that.

LW: When was that?

CS: A couple months ago. April, I think. It doesn’t feel like much, but to still have that check mark is cool. What still shocks me is when I go into the analytics and I see that, like, four people in the Netherlands heard my music. And I don’t know anybody in the Netherlands. It just really makes me think about how much the internet can reach somebody.

CS: Well right now I don’t do any of my own beats. Mostly I just go in, rap it, clean it up, put it on, and boom, onto the next track. Eventually I’m gonna want to start making my own beats, so I know the process is gonna change. It’ll be a bigger time investment, but it’ll also be a more personal thing. I appreciate that there are people out there that are willing to make free beats. But I think it would be cool to actually make my own. They’ll be my babies.

LW: Is there anything you wanted to plug?

CS: Like I said earlier, check out small business like Odd Sox and Sprayground. Just support local businesses and support local artists. You know, go to the show 20, 30 minutes before it starts. The band, the artists, they’re more than likely to talk to you after the show.

LW: Best way for people to reach out and find you?

CS: Check me out on Spotify, Chef Squid. Check me out on SoundCloud, Twitter, Instagram, ChefSquid317. If you’re interested in booking, send me an email at chefsquid@gmail.com. I’d be happy to chat with you.

Emmys carpet gets under way with the kids of ‘This is...