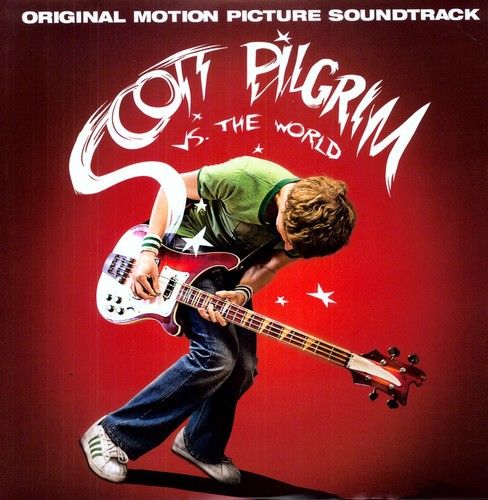 Today in Exploring Soundtracks, we’ll be looking at the music-driven Scott Pilgrim Vs. The World, directed by Edgar Wright. Yes, even before bringing us Baby Driver, Wright was looking for ways to enhance his films with music.

It seems like Wright can’t help himself when it comes to infusing his films with memorable soundtracks. From Hot Fuzz, Shaun of the Dead, and more. These soundtracks seem to shine with their own personality, sounding almost more like mix tapes than anything.

So without further ado, let’s dive into this fun and funny film about one boy who has to fight the seven evil ex-boyfriends in order to win of the girl of his dreams.

One of the things that sets Scott Pilgrim Vs. The World apart from other comic book to movie adaptations, is that its soundtrack revolves around the characters more intimately. Scott Pilgrim is in a band, and the songs reflect the kind of music his band (Sex Bob-Omb) plays. In the case of the opening song that plays over the credits, its the exact music his band is playing, which is a nice stylistic touch.

The Sex Bob-Omb songs, while played by the band in the film, were written by Beck, who contributed more than a few songs to the soundtrack. In “Threshold”, “Summertime” and “Garbage Truck”, you can hear Beck’s early, 90’s slacker punk style coming through. And he even brings in his softer side with the love song, “Ramona”.

Music plays a role in many of Scott Pilgrim’s battles against Ramona’s seven evil exes. The first, flame-wielding pirate with his dancing hipster girls; the bass battle with Todd the super-powered vegan, and the battle of the bands against the electric Katayanagi Twin, during which, both bands’ summon virtual animal avatars that fight to the death.

The punk rock energy played by Sex Bob-Omb throughout the film fuels the fight scenes with a fun energy. And the 8-bit version of “Threshold” reflects Scott Pilgrim’s total immersion in the world of video games.

You can pick up your own copy of the “Scott Pilgrim Vs. The World” Soundtrack at the Lemonwire store here.

“A Quiet Place” is a smart genre film that doesn’t take...