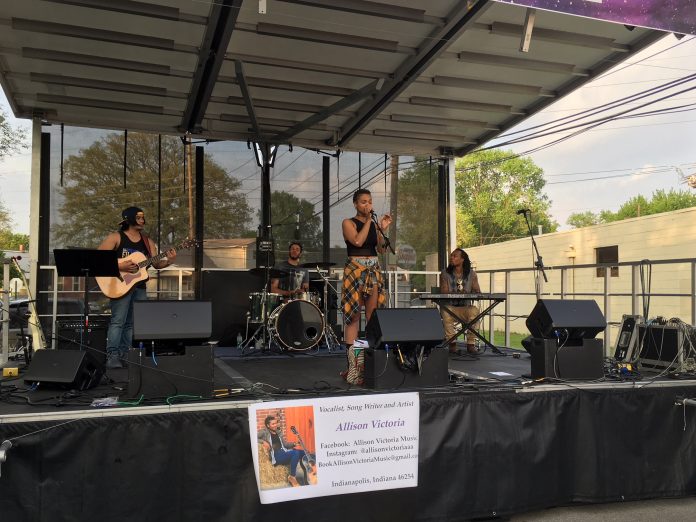 For the last five days, the Fountain Square neighborhood of Indianapolis has been occupied with stages, food trucks, and crowds of happy music lovers. Unfortunately, I wasn’t able to make it there for most of the festival, but I did get the chance to head down on Saturday evening.

An Evening of Music, Art, and Community

The atmosphere on Virginia Avenue was electric. Local art vendors lined the street selling crafts and antiques to curious passing attendees, while throngs of happy hipsters nursed plastic cups of frothing beer. From the end of the street, you could hear the faint buzz of strumming guitars.

The buzz of music from the main stage grew louder as I made my way toward the heart of the festival. To my left, a tall, thin man continued to produce giant balloon after giant balloon to the delight of a few watching families. To my right, couples and groups of friends lounged on the curb, kicking back after a long day of walking in the now-setting sun.

An assortment of food and beer trucks were located at the VAMF food court on the corner of Virginia and Woodlawn. There, a number of local Fountain Square restaurants sold food to lines of hungry customers. A Flat 12 Bierwerks truck kept a moderate line, which didn’t seem to shorten at any point throughout the evening. 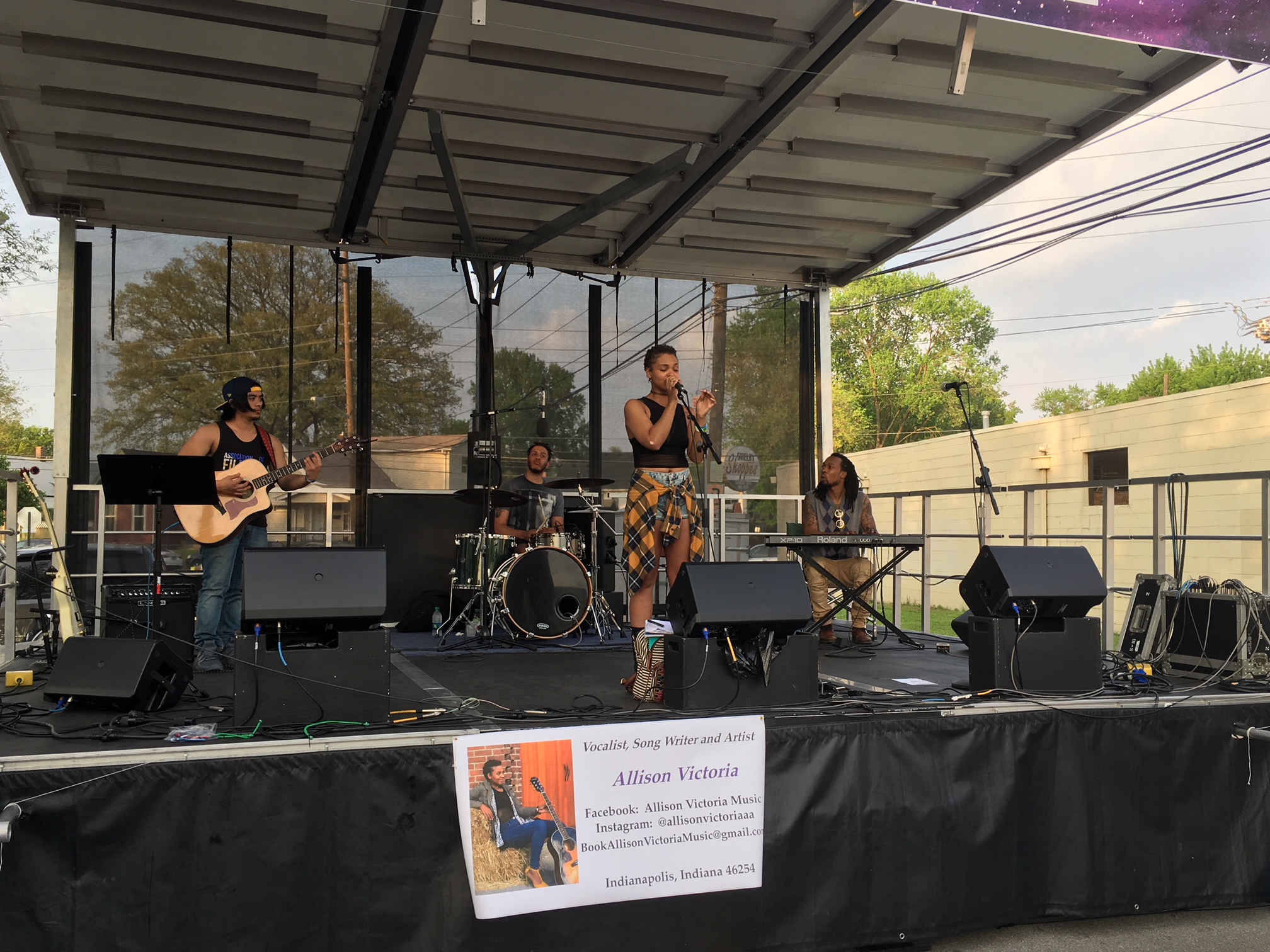 By the time I made my way to the main stage, Allison Victoria was coming to the last few songs of her act. She was just finishing up a lo-fi jazz song, and soon moved on to a Lauryn Hill cover of “I Get Out”. Her backing band consisted of a guitarist, keyboardist, and drummer.

While the songs that Allison Victoria played all came from a different style, the one common factor they all had was soul. Victoria’s vocals are raw and poignant, and often maintain a certain kind of grittiness that was especially refreshing behind some of her more jazzy tunes.

After the band played their last song, the crowd began to cheer for an encore. Victoria addressed the crowd, “We wanted to end with a bang, but okay.” After consulting with her band for a moment she turned back to the crowd, “How about a love song?” and launched into it without any hesitation. 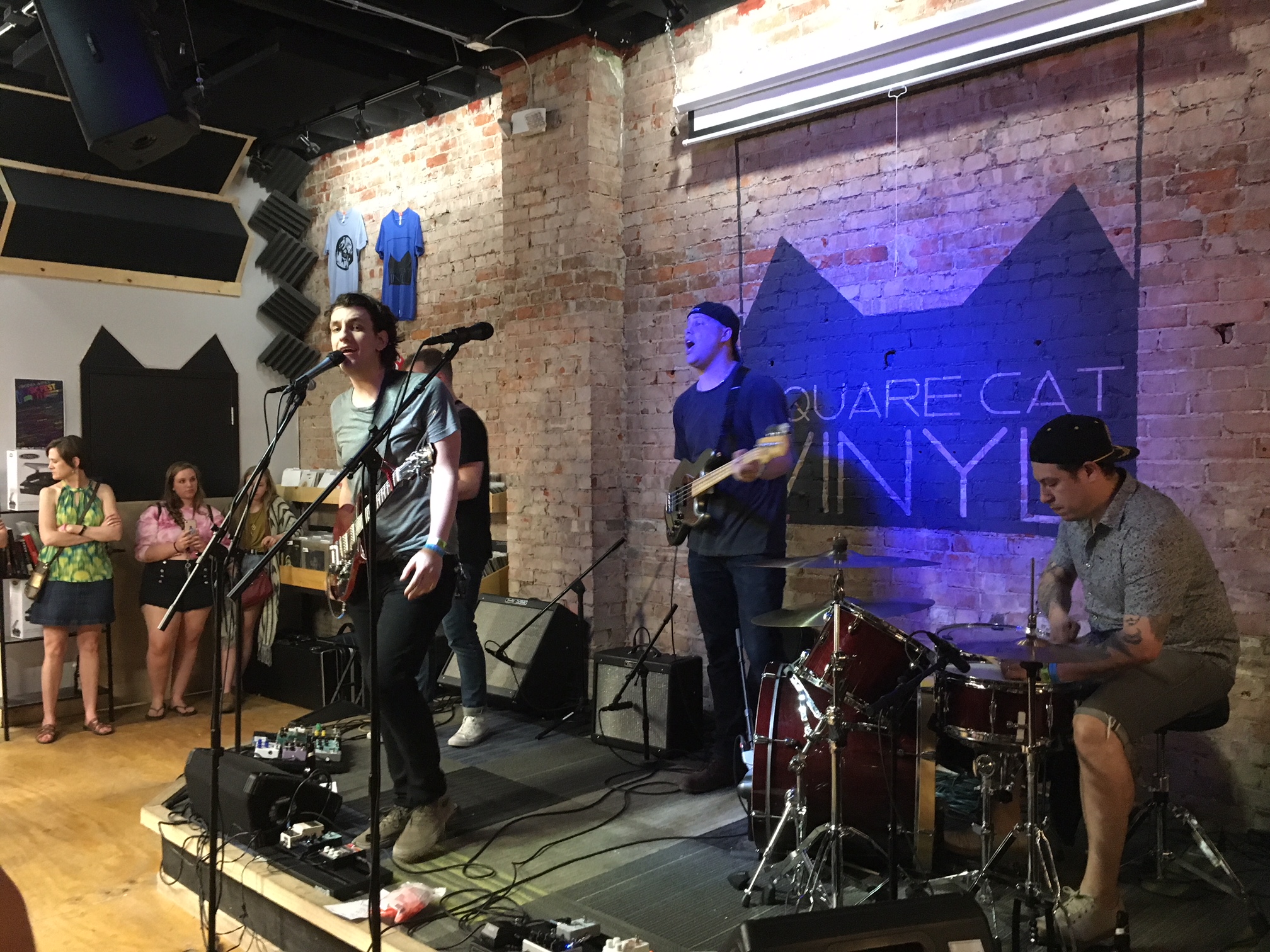 After the relaxing and soulful performance of Allison Victoria, I walked around the corner and into Square Cat Vinyl, where The Inventors were already playing. The change in genre was immediately evident. Before I even set foot in the door I could hear the power chords and rhythmic bass. This wasn’t a soft and easy-going group. This was pure, unadulterated rock.

The Inventors are a four piece rock band from Chicago that draws from a wide variety of influences, but sticks mainly inside the lines of rock. The song they were playing when I walked in was a catchy, feel-good, poppy tune played with a lot of energy. The small crowd inside Square Cat was packed in like sardines between shelves of records, tapping their feet and nodding their heads to the beat.

The inventors’ next song was “The Message”, a slower piece that gradually built its energy. While their progressions weren’t necessarily the most original, they do a good job of working within each song’s structure, and make them all feel unique through the use of specific tones and effects.

After a few more songs, The Inventors ended with a Bowie cover, much to the audience’s pleasure. 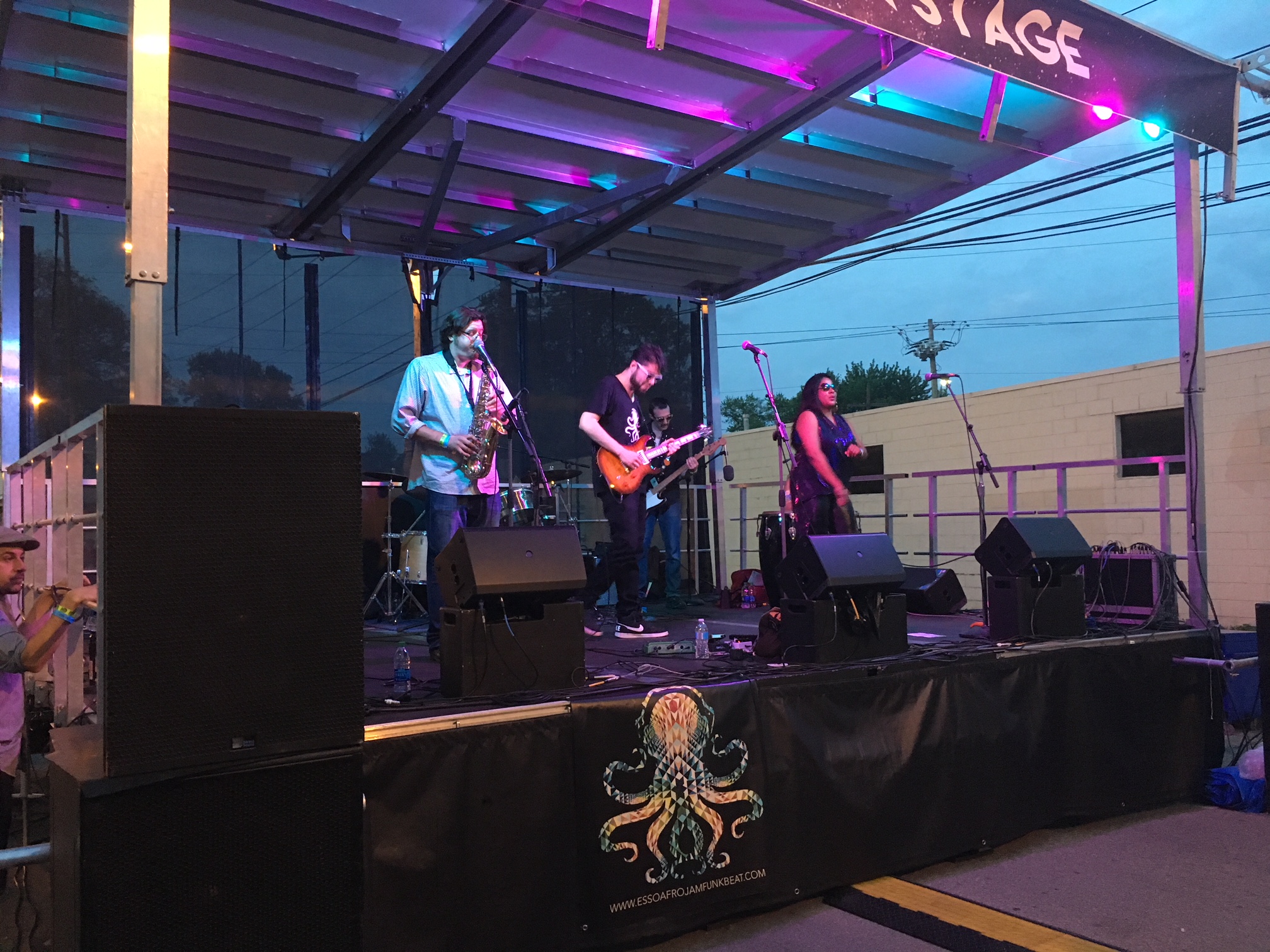 By the time The Inventors finished at Square Cat, another band was already playing on the main stage. I admit that I was compelled to make my way over just from hearing what the driving beat reverberating through the air. I was hearing music made for dancing, and couldn’t resist.

Esso Afrojam Funkbeat is a six member multicultural band that specializes in high energy, infectiously funky grooves that are nearly impossible to listen to without succumbing to their rhythm. Their songs are uniquely inspired fusions of Afro-Latin compositions and jams. Listeners nearest to the stage were smiling, swaying, and moving to the beat.

As the last act on the main stage for the night, Esso Afrojam Funkbeat hit the perfect notes to end on. 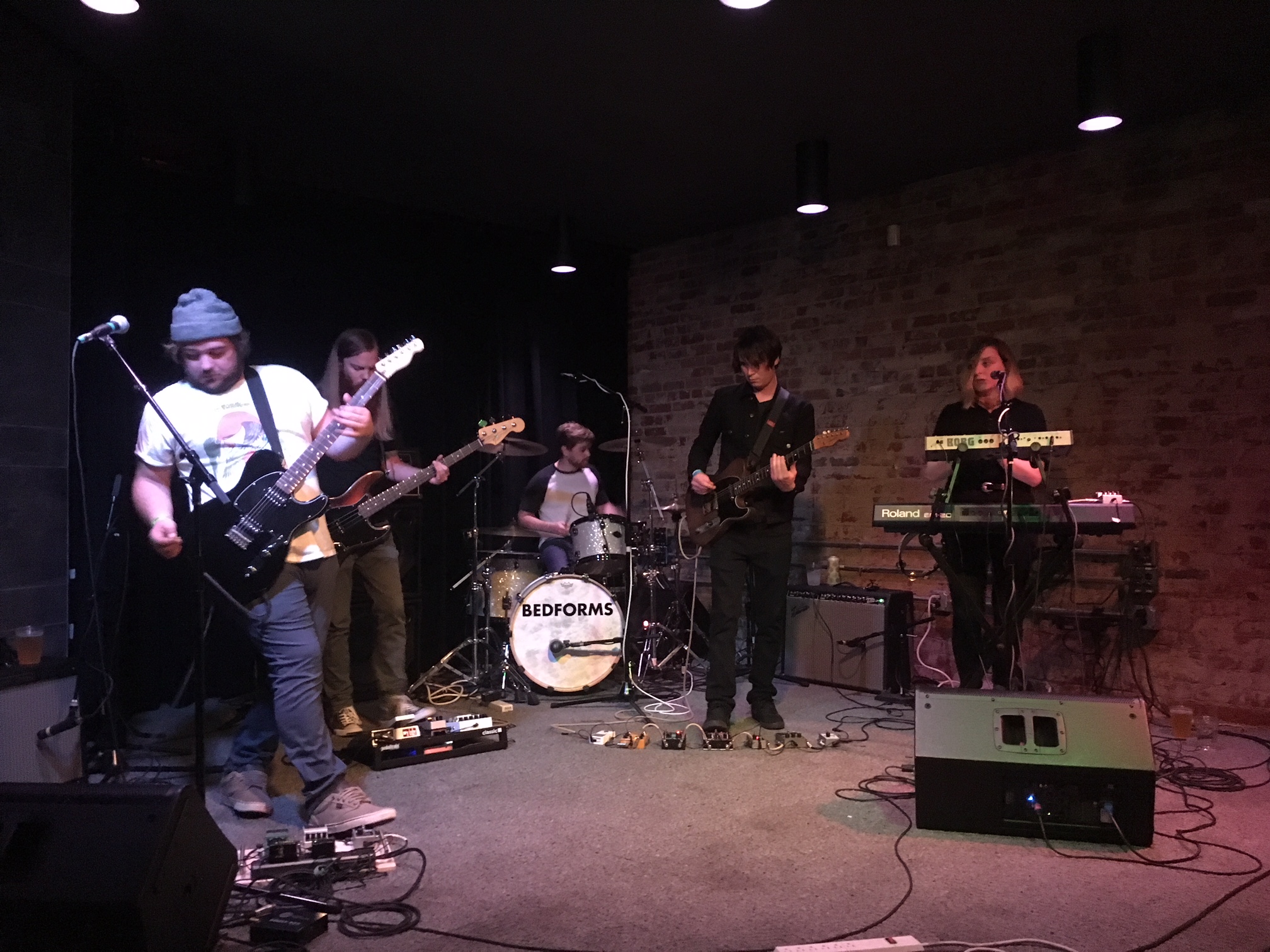 Although the main stage had finished for the night, the music was far from over. At 10:00 at The Pioneer, Bedforms was taking the stage, and ushering everyone into the night with guitar-soaked psychedelia and poppy hooks.

I’ll admit that by this time, I was pretty tired, and even with the pulsing keys and ethereal vocals of Bedforms, I had to admit defeat and head in for the night. I’m not saying by any means that Bedforms put me to sleep. But their name may have been tugging at my subconscious, and reminding me of how tired my feet were.

While I left before Bedforms finished their act, I still made sure to remember their name, as you should too.

Overall, my experience walking through the Virginia Avenue Music Fest was beyond pleasant. I had a great time, and it was clear that so did everyone else who attended. If the festival wasn’t on your radar this year, I feel sorry for you, as there were a lot of great acts you missed. On the other hand, you can take some solace in the fact that many, if not all of them, will return to play in Fountain Square once more.

And if you see any of the above acts coming into town again, do yourself a favor and check them out. You won’t be disappointed.