Toronto’s Rock N’ Roll scene is alive and well thanks to bands like Drop Top Alibi who are determined to bring back the groovy days (and hairstyles) of good ol’ fashioned Rock N’ Roll. When we interviewed the band last fall (read the full interview here) they shared that they were part of a broader community of Southern Ontario rock bands, many of which they have shared the stage with at Toronto venues like The Rockpile, The Hideout, Cherry Cola’s, and The Horseshoe Tavern.

One such band is One in the Chamber. Their website reflects their aesthetic and they describe themselves as “dirty Rock & Roll straight from the heart of Toronto.” The band consists of four members: Mike Biase on Lead Vocals and Guitar, Cecil Eugene on Lead Guitar and Vocals, Christian Dotto on Bass and Vocals, and Gerrod Harris on Drums and Vocals. The band has made their rounds in the Toronto scene but have also expanded their reach outside of the GTA, performing in places like Burlington, Brantford, Ottawa and even the MGM Grand in Las Vegas, Nevada.

They released a small collection of demos titled “The Boston Session: Bootleg Demos” which were recorded in Massachusetts with Bango Tango guitarist, Scott LaFlamme before releasing their live album “Live from The Rockpile” in 2017. All of this has laid the groundwork for the release of their debut studio EP which is set for release this summer. Recorded at Toronto’s Phase One Studios with Murray Daigle’s guidance, the band released their debut single and video “Bills to Pay” on April 30.

"There is no doubt in my mind that One In The Chamber should be playing bigger stages as direct support, for some of Canada’s biggest rock bands, very soon. Do yourself a favour and check out this band this summer". Head over to @canadianbeats to read @solissplendor_photography's review and to see more of her photos! #oneinthechamber #oitc #BillsToPay #rocknroll #livemusic #rock #band #toronto #music #concert #guitar #bass #vocals #singer #gibson #fender #custom #stratocaster #lespaul #concertphotography #live #sundayfunday #review #newmusic #canada #canadian #musician #concert #stream #download #follow

After covering a number of shows for the band, Nicole Wolfe at Canadian Beats, shares: “There is no doubt in my mind that One In The Chamber should be playing bigger stages as direct support, for some of Canada’s biggest rock bands, very soon.” In fact, they had the honour of performing at Scott Weiland’s last concert before his untimely death. Needless to say, this experience has had a profound impact on their performance style and their dedication to their craft. 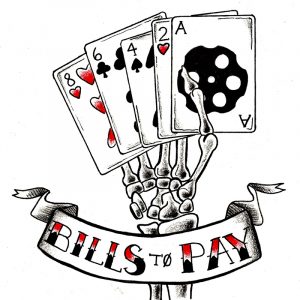 In terms of the band’s overall sound, Spill Magazine notes that One in the Chamber has “a distinct and modern sound that feels reminiscent of flipping through old vinyl.” “Bills to Pay” is a prime example, although I would add that the “modern sound” can be largely attributed to the clean studio quality of the track. While “clean” may not seem compatible with the raw edginess of “dirty Rock N’ Roll,” in this case, it works. There are enough guitar riffs, solos, and high-pitched vocals to satisfy even the most hardcore Rock N’ Roller.

But, One in the Chamber is not simply recreating old sounds- they’re adding their own flair. Donning sunglasses and leather jackets, the “Bills to Pay” video, directed by Diego del Río, sees the band rocking out on stage at The Hideout in Toronto. Like old pros, they jam out to the chorus: “I’ve got bills to pay/ and no money saved/ and no place to call my home.” In one line, they’ve summarized an entire lifestyle- the lifestyle of the true Rock N’ Roller.

We’ll be keeping an eye on these rising rock stars!