After making happy “cool again” with the single “Don’t Matter Now,” (which you can find here) George Ezra, sometimes known informally as Geoff to fans, has released the second single, “Paradise,” from his much anticipated second album.

The boyish British charm juxtaposed by his deep soulful vocals has made him a rising star since the release of his first album “Wanted on Voyage” in 2014. 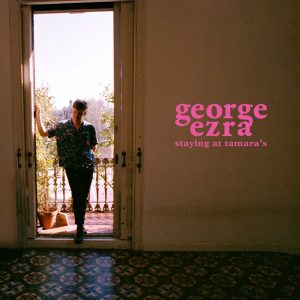 With the release of the music video for “Paradise,” Ezra also announced that his second album, titled “Staying At Tamara’s,” will be released March 23. If you can’t wait to get your hands on it, it is available for pre-order on his website.

If these two singles are any indication of the overall album, the theme will be the paradox between the seemingly lighthearted content and sound of the song, and the undertones of darker issues that inspired the song. For example, with “Don’t Matter Now,” Ezra revealed that while the sound of the song is uplifting, it was inspired by his battle with anxiety.

Similarly, “Paradise” follows the same structure, balancing between a carefree dance-pop song and a song that is dealing with longing, loneliness, and unrequited love. In fact, “Paradise” is subtly darker in sound than the mellow folk acoustic from “Don’t Matter Now.” The bass is heavier, the chorus is louder, and the bridge is perhaps the highest octave we have heard from Ezra’s vocals.

As if to match the song, the style of the music video is edgy, with jump cuts between red and blue scenes, electric lights, and Ezra alone with his guitar- the quintessential image of Ezra’s career. As the song reaches its climax, the jump cuts become more frequent, and the cut scenes depict some unsettling images from a person holding a human heart to a guitar being smashed to a bass drum on fire.

There is a lot to process in this short four-minute video, but the main takeaway is the pharmakon of love. In other words, love is both a remedy and a poison. It feels like “paradise,” but also as if you’re being repeatedly punched in the gut, as demonstrated by the quick jump cuts to the boxers hitting the same spot over and over.

Everyone has a different way of handling their stress and anxiety, and for George Ezra, the antidote to his anxiety is high energy perfectly packaged pop singles that, to the casual listener, would be as harmless in content as it is in sound. Those that listen closely will discover that this is not the case. But, to each their own!

Use of force criticized in protests about police brutality

2020 Watch: Will Tuesday clinch the nomination for Biden?

US heads into a new week shaken by violence and pandemic

Song of the Day: “Can’t Keep Johnny Down”