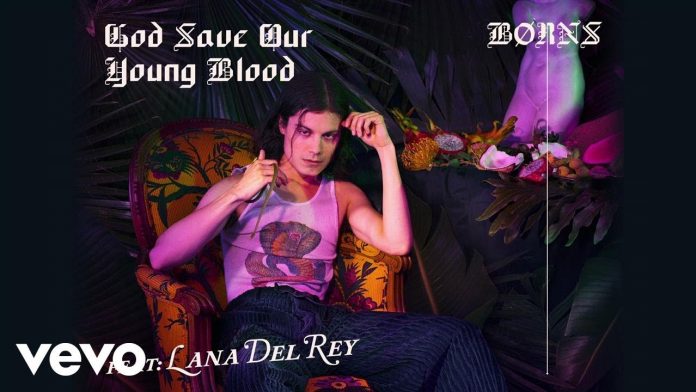 The follow-up album to his 2015 Dopamine takes listeners on the sonic journey of a breakup. But don’t mistake that fact to mean that Blue Madonna lacks the saccharine qualities of the sticky, disco love-pop featured on Dopamine. It doesn’t. Where Dopamine was dreamy, primrose and hopeful, Blue Madonna is wistful, anthemic and introspective. If anything, Blue Madonna finds itself just slightly more grounded in reality; it’s whimsy on earth.

The album opens with the beachy spiritual “God Save Our Young Blood.” The song captures that longing for eternal youth popular in the electro-pop genre with artists such as Lorde and The Chainsmokers. Here, BØRNS artfully paints a picture of warm days spent lounging on the beach, teenage drives with windows rolled down and early mornings (potentially under the influence of something) spent watching sunrises. BØRNS has never been one to shy away from spiritual imagery as he draws from the Biblical creation story on this track with lyrics like “Climbed up the tree of life, kicked out of paradise.”

On Dopamine, he dedicated an entire song to the concept of reincarnation (“Past Lives”). Lana Del Rey, who is featured both on opening track “God Save Our Young Blood” and as a backing vocalist on title track “Blue Madonna,” provides a stunning and dreamy effect to the song.

Tracks two and three (“Faded Heart” and “Sweet Dreams”) both begin to hint that this is a breakup album. But where “Faded Heart” is enthusiastic and strangely upbeat considering its lyrical plea (“…don’t you break my faded heart”), “Sweet Dreams” is mellow and reflective. This leads quite smoothly into the fourth track, “We Don’t Care,” where we meet a careless but still sleep-deprived BØRNS who describes being haunted by a lover who is both his “light” and “daredevil halo.”

On “Man,” it’s cute lyricism, falsetto vocals and end-of-the-world theme are reminiscent of songs of yesteryear.

While “Iceberg” is sonically sensuous, with flashy guitars, repetitive vocals and lyrics that play off the idiom “break the ice.”

The bitterness bites on “Second Night of Summer” where BØRNS laments about his ex-lover “throwing me that shade like I’m not cool enough.” The witty pun featured in the chorus repeats throughout the track ironically framed between softly sung verses about “trying to forget her.” Even the backing beats work together to juxtapose this sweet sadness against angry resentment.

Most surprising on the album perhaps is “I Don’t Want U Back.” It’s as potent and empowering as any Beyoncé breakup anthem. The fist-in-the-air tune details the end of a relationship where we finally meet a BØRNS who is getting enough sleep each night. “I sleep better than every night you were lying next to me,” he croons before realizing that he no longer wants his ex-lover back.

Out of his entire discography, “I Don’t Want U Back” could very well be the most realistic song, as he speaks in everyday terms and uses imagery of his ex running out of the house and seeing her at the club. This is quite interesting for a singer who has predominantly relied on metaphors and often speaks in cosmic, romanticized terminology.

Interlude “Tension” provides horns over electro sounds and the realization that perhaps the feelings were not mutual. It’s catchy enough that it might leave you wishing it was a full-length track.

On “Supernatural,” we return to the classic cosmic lyricism as a dreamy, faraway-sounding BØRNS buzzes over strings and velvety drums.

If title track “Blue Madonna” were a dress, it would be black, slinky and fit like a glove. With BØRNS and Lana Del Rey whispering witticisms over a bass beat, the track pays a subtle homage to Madonna (“Just want to make her feel like a virgin, a version of herself that she once knew”).

Blue Madonna closes out beautifully with the nostalgic, piano-driven “Bye-bye Darling.” A track so melancholically stunning you may just tear up while listening to it. The song reflects on the end of the relationship before bidding it a final farewell (“We had a good run darling, don’t you cry”). Elton John fans will be especially appreciative of this one.

Together, the 12 tracks combine into a sonically and thematically cohesive album that is consistent with BØRNS’s sound on Dopamine but still feels new and otherworldly.

We give it a solid 9/10. It would be a perfect ten if the lead singles (“Faded Heart” and “Sweet Dreams”) had pulled more of a punch in creating buzz prior to the album’s release. Though, amidst the tapestry of Blue Madonna, they fit in quite snugly.

Buy it on iTunes here.

The Future is Here: Vaya Futuro Is the New Voice of...

Walk the Moon Release “Kamikaze” Ahead of New Album