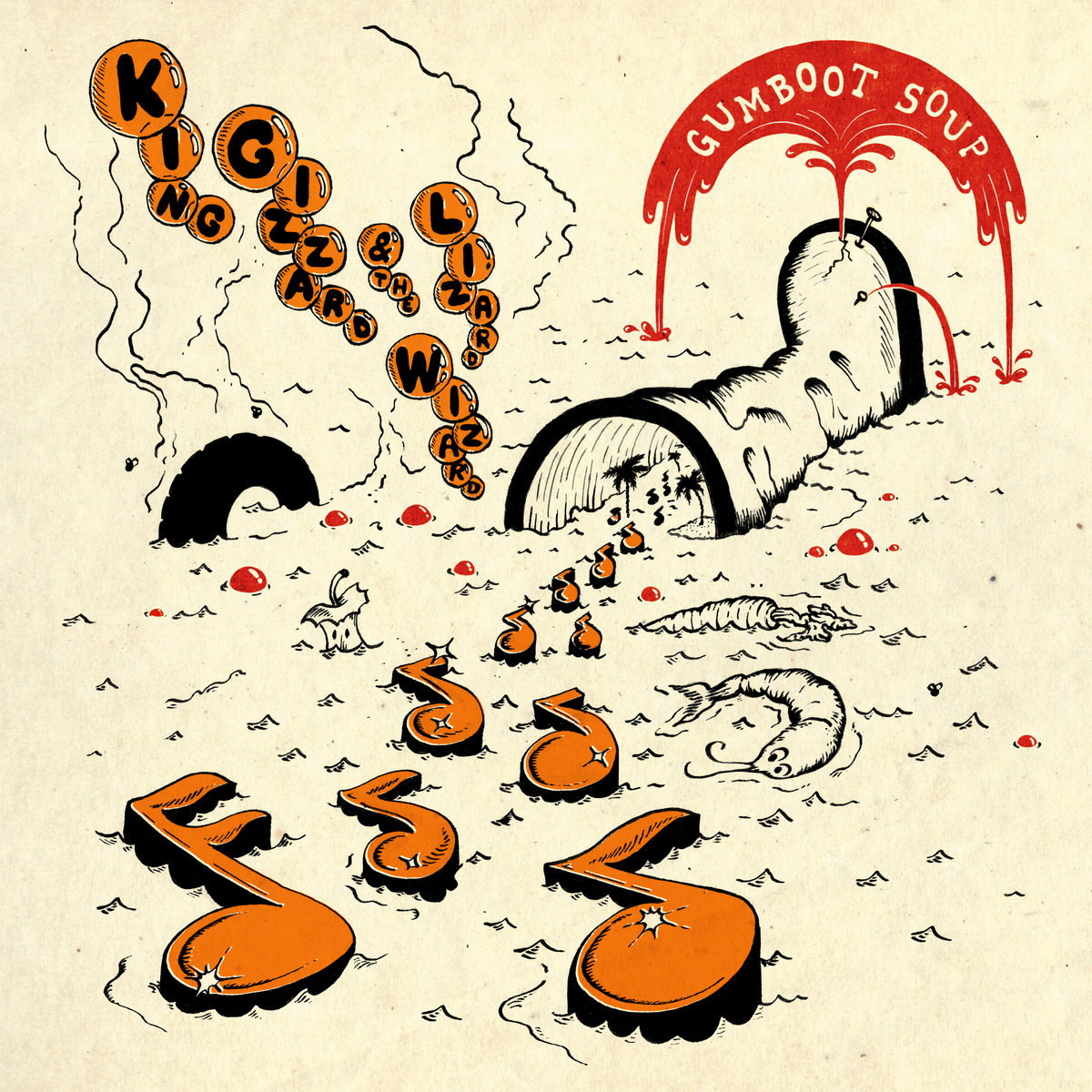 In late December King Gizzard & The Lizard Wizard released their fifth album of 2017, delivering on a strange promise to make five albums in a year. Their fifth album of 2017 “Gumboot Soup” is a panting jog over the finish line. It’s a fine album worth listening to if you like psychedelic rock, but it’s forgettable. King Gizzard has done and hopefully will do better than “Gumboot Soup.”

“Gumboot Soup” lives and dies by its wide variety. There are so many different kinds of tracks on this album that variance becomes its identity.

“Gumboot Soup” comes alive with the fun and wild experimentation the band takes on in making songs like “The Great Chain of Being” or “The Last Oasis.” These songs show the band doing something slightly outside of the norm for them with interesting results. “The Great Chain of Being” makes for a pretty solid sludge or stoner metal song. “The Last Oasis” has a hilarious mesh of very trippy and intense lyrics with deeply mellow, smooth jazz adjacent melodies.

“Gumboot Soup” dies in how lacking in connection its songs feel. This album, more than any other King Gizzard one I’ve listened to, feels less like an album and more like a collection of songs. If there is a binding theme or story, then it doesn’t feel like it. All songs feel wildly detached from each other. The result is that “Gumboot Soup” feels like a pile of b-sides King Gizzard pulled from to cross the finish line. “All Is Known” has all the lyrics and theme of “Polygondwanaland” but probably just didn’t make the cut.

It doesn’t help “Gumboot Soup” that King Gizzard chooses to alternate between light and heavy tracks. I’ve heard bands do this before and I think it’s to attract listeners through contrast. It’s like building up softly to a heavy drop. It’s hard to make it work and King Gizzard doesn’t quite manage it. Sandwiching a more aggressive track in between two very mellow ones often weakens the mood. A handful times in “Gumboot Soup” I was on the verge of settling into a nice mood – – relaxed or intense. Then King Gizzard knocked me out of it by following with a tonally dissonant track.

Particularly, this makes some of the aggressive tracks – solid on their own – very easy to forget. “Greenhouse Heat Death” and “All Is Known” really get buried. “The Great Chain of Being” survives because of just how wildly it contrasts with the rest of the album but that in turn makes the prior track, “Down The Sink,”  feel more forgettable.

There are times where King Gizzard finds a groove and this album almost bursts into a full sprint. “Muddy Water” is a fun and groovy jam that follows up well after “Barefoot Desert.” “I’m Sleepin’ In” and “The Wheel” don’t feel super strong alone but make a nice eight and a half minutes of mellow mood together. “The Great Chain of Being” and “Last Oasis” feel different in tone but their lyrics give them some common ground.

The album has solid songs that grew on me too. I ended up loving “Beginner’s Luck” and “The Great Chain of Being” for being such classic genre jams. “Beginner’s Luck” feels torn from a goofy flower child band and “The Great Chain of Being” sounds ripped from some old metal – -before the genre calcified into a form notably harder and heavier than rock music. Songs like “The Last Oasis” and “Muddy Water” had interesting mixes of lyrics and instrumentation that kept me interested.

Mostly, “Gumboot Soup” suffers from feeling too much like a hodgepodge. It lacks any sort of consistent mood, story, or theme and King Gizz could have done a better job of creating flow between the songs. I think “Superposition,”  while a good song, shouldn’t be on the album. Get rid of it. And, Muddy Water flows into “Down The Sink,” a song that fits its tempo and even lyrical theme a bit better. Or get rid of “All Is Known” and put “Superposition” in its place to close out in a relaxed mood.

“Gumboot Soup” soup sounds fine but forgettable. I’ll remember “Polygondwanaland” or “Nonagon Infinity.” Both albums executed interesting ideas in unique ways and left me with tracks I’ll revisit. “Gumboot Soup” gave me a lot of good songs that don’t fit well together and I get lost because of it. The album becomes forgettable and the songs do, too.

Singer R. Kelly has been arrested on sex trafficking charges

Loretta Lynn addresses fans for the first time since stroke