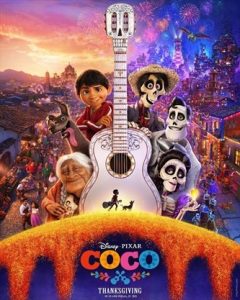 Disney Pixar collaborations have a reputation- for brilliant storytelling and… making you cry. “Coco” is no exception. In fact, it could perhaps be one of their greatest achievements yet. The stunning, colourful animation, the Mexican traditions, and the spirited protagonist, Miguel, were all important elements of the movie’s success. However, the music, both as a theme and as an element of the movie itself, was incredibly poignant and powerful.

For those that have not seen the film (and if you haven’t, what are you waiting for?!), the story centres on a young boy, Miguel, from a large family who dreams of being a musician. However, music is forbidden in his family because long ago, one of his ancestors abandoned his family in pursuit of his music career. Miguel feels as though he must choose between his family and his music, even though both are part of who he is. During the Day of the Dead (Día de Muertos), he somehow ends up trapped in the Land of the Dead, and must choose what is most important to him. Along the way, Miguel’s family story continues to unfold, and this impacts who he thought his family was, and who he wants to be.

“Coco” has found success with critics and audiences alike (a rare feat), and just snagged best animated film at the Golden Globes. Given the current political climate, this spotlight on Mexican tradition and culture is aptly timed. It is also one of the first Disney Pixar films to feature an all Latino cast.

As far as the theme of music goes, there are two major takeaways from this film.

Coco is a colourful, cultural and musical journey that will pull on your heart strings as quickly as Miguel plays his guitar strings.