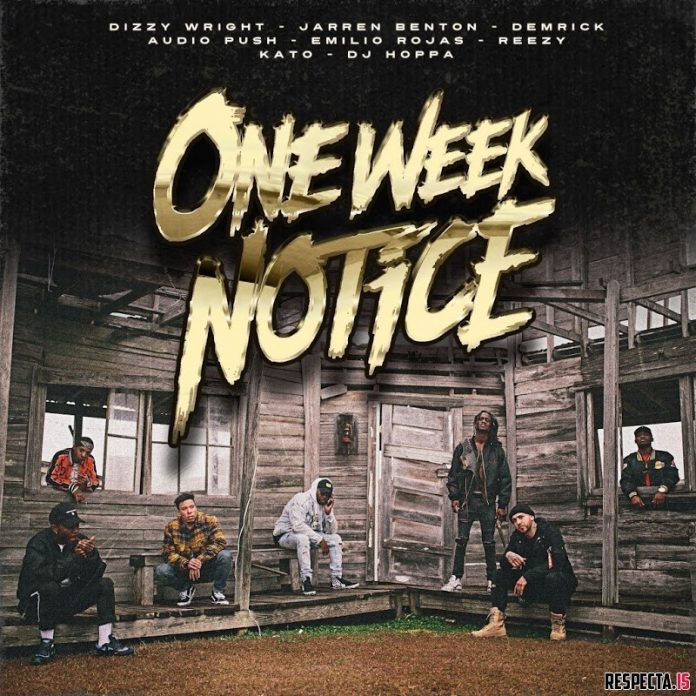 The super group is made up of rappers from several different geographical locations and record labels. Hiphopdx reports that Funk Volume founder Damien Ritter brought together nine rappers and producers to record an album in one week.

The nine members of One Week Notice met in Austin, TX to record the album. DJ Hoppa, Kato and half of Audio Push handled all of the album’s production.

Quite a bit of the album sounds like run-of-the-mill Trap. “Gutter” has the snare drum and gunshot sound effects that have become staples of Trap. “Die a Legend” has some atmosphere but when the drums kick in it becomes your basic Trap beat.

There’s nothing wrong with the production on the album, but there’s also nothing special either. There isn’t a single beat that will make you rewind (or replay more appropriately) the album.

At least “Count on That”, “What Means the World” and a few other songs get away from a basic Trap sound. Overall, however, the album’s sound doesn’t stand out.

The producers can’t really be blamed for an album that was made in one week. Ostensibly the album should be able to lean on the strength of it’s lyricists. Unfortunately that’s not the case.

Ranked by performance Dizzy Wright probably shines the brightest. That being said, it’s not always easy to know which rapper is rapping. Emilio Rojas is easily identifiable because several of his verses involve him speaking Spanish or shouting out his heritage. Other than that it is a little difficult to keep track of who’s who.

There are some meaningful lyrics on the album. “Setbacks” and “In My Zone” are more than attempted bangers. That doesn’t change, however, what the album’s focus appears to be.

Ultimately the album suffers from its own design. Making an album in a week did not afford these artists the time to create something that separates itself. Most of the songs on “One Week Notice” sound like any-hip-hop-song-USA.

The album had a meritorious beginning, but the execution falls short.