Guess who rocked the charts in the 1960s and 1970s with hits like “American Woman,” “No Time,” and “Laughing.” And, guess who was inducted into the Canadian Hall of Fame in 1987? The Guess Who! See what we did there? That’s pretty much how the band got their name, although the story is slightly more interesting, all thanks to a man by the name of George Struth.

George Struth joined the Canadian record label, Quality Records, in 1957, eventually working his way up to become the first President of the company (his predecessors being only General Managers). According to Cameron Carpenter, “George didn’t look very rock’n’roll but his office sure did.” Carpenter alleges that his office was covered with old records and photos of him with various famous bands.

Struth also had a great ear for hits, and when he came across the Winnipeg rock band Chad Allan & The Expressions, he devised a clever marketing ploy to get their music on the radio. He took their single “Shakin’ All Over,” and sent it out to local radio stations with nothing but a handwritten label: “Guess Who?”

Struth had hoped that their British rock influence would trick the stations into believing that this Canadian band was actually a British band with a hot new track from overseas. In his book “Randy Bachman’s Vinyl Tap Stories,” the former band member recounts the story of their relationship with Struth. He alleges that Struth told the band: “We’ll let people guess who you are. That way, they’ll think you’re a mystery British group. We’ll start this rumour that this is a recording by some guys from various British bands, like one Rolling Stone, two Beatles, one Shadow. They couldn’t put their names on it for contractual reasons so they simply labelled it ‘Guess Who?’” 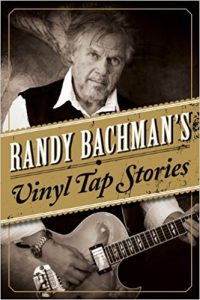 As this was during the heart of the British invasion, it seemed likely that this trick could work. Except that radio announcers introduced the single exactly as it was written, unwittingly naming the band The Guess Who. Bachman declares: “That’s how we got our name the Guess Who, even though we didn’t want it… we told him [Struth] we hated it! Chad was particularly disappointed that his name was now omitted.” The only consolation for the band was that their single “Shakin’ All Over” reached number one in Canada, perhaps in part due to their mysterious band name.

As the band rose to international success, they eventually dropped the question mark, going from The Guess Who? to simply The Guess Who. By 1970, they became the first Canadian rock band to reach number one in the U.S. with their hit single “American Woman.”

You can find more on The Guess Who at The Canadian Encyclopedia.