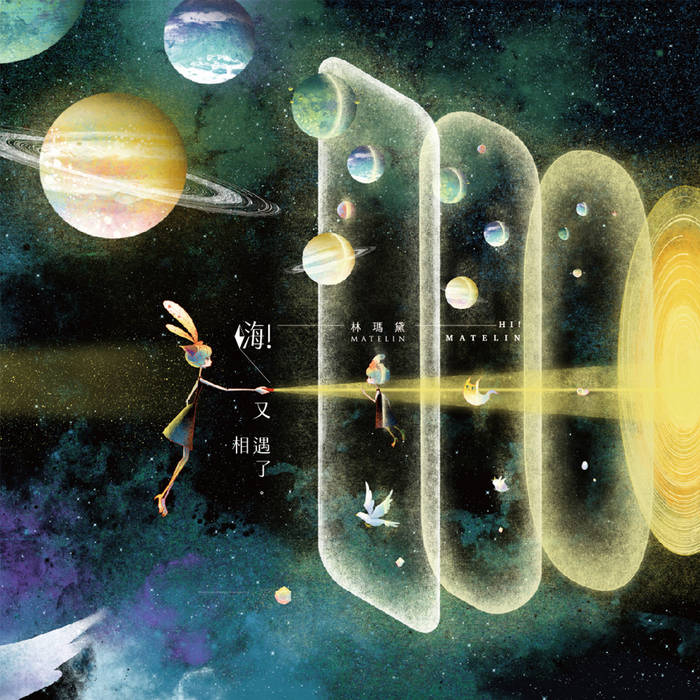 You might not have heard of Taiwanese trip-hop trio 林瑪黛 Ma-Te Lin but you should get to know them if you like music with a strong aesthetic and mood.

Ma-Te Lin excels in creating downtempo and chill electronic rhythms around a singer with a voice ripped out of a jazz lounge in a dream. Millions of other electronic acts do the same thing but Ma-Te Lin rises above the crowd by not taking a mellow mood as an excuse to be lazy. Downtempo electronic music has a bad tendency to lean on repeated beats and a few strong instrumental samples to make a 5-plus minute-long track. You can feel the full brunt of the laziness listening to a homework edit that’s one song stretched on for 30-plus minutes.

A lot of chillwave, trip-hop, and other downtempo techno acts are more boring than relaxing because they have no changing dynamics, little movement, and use the same simple sounds over and over. Almost every Ma-Te Lin track has solid rising and falling action and an interesting selection of sounds. These simple difference make Ma-Te Lin more interesting and relaxing.

“嗨！又相遇了 HI! MATELIN” makes some general changes to Ma-Te Lin’s sound. It brings the guitar rhythms closer to the fore, pushing the album more towards rock. It takes longer to build in spots and asks for more patience from the listener but also puts more into the builds and increases the payoff. Darker tracks like “My Place” are gone and the tone feels lighter and sweeter than it used to.

Much of Ma-Te Lin remains the same. Each track still has beautiful instrumental samples that complement lead singer Lin Yiqian’s dreamy vocals very well. If you’re looking for tracks that cut to the long-time core of Ma-Te Lin you can find them in the closing tracks.

As is traditional to Ma-Te Lin, Lin Yiqian’s vocals drive “又相遇了 Meet Again” and “Please Come Home” but the electronic rhythms underneath make them special. Did I mention they make a mean music video?

In “又相遇了 Meet Again” Lin’s ethereal Lana Del Rey reminiscent voice takes center stage but it’s the beat that makes the song. The song opens with a mesh of crunching sounds and gentle, industrial echoes that continue on as the main backing beat. Lin’s vocals layer on top of each other into a beautiful ambient haze that can easily wash out the beat. Keep hold of the beat and listen to it as it transforms because it’s simultaneously rich, clever, and lowkey.

“Please Come Home” lets Lin’s vocals lead even more heavily. It feels reminiscent of their other vocal ballads like “Hope Popo” but it’s more patient and has a better payoff. The lyrics also tell a touching story about an old woman coming down with Alzheimer’s. “Please Come Home” is a call for the woman to return and remember.

Ma-Te Lin’s growth can be best heard in “出發 Journey to the Universe.” In my mind, this is easily the most fun song Ma-Te Lin’s ever made. It’s not very complex. Most of the guitar chords are dead simple and the bars are pretty straightforward. Well-executed simplicity makes for a fun song. Queen’s “We Will Rock You” makes it clear how simple can mean fun.

In “出發 Journey to the Universe” Ma-Te Lin pulls out a lot of familiar stadium rock tropes to make it a blast to listen to. Back up vocals shout “出(chu)[set] – 发(fa)[out] – 我们(women)[we] – 出(chu)[set] – 发(fa)[out]” and generate hype for the chorus. A simple bass beat lets audiences feel where the rhythm falls and bounces along with ease. This isn’t usually what Ma-Te Lin sounds like but it’s a welcome change.

“出發 Journey to the Universe” works as much because of Ma-Te Lin’s old tricks as their new ones. Producer Shao-Yong Huang selects an awesome set of space beeps and trickling synths that make the song pop. Ma-Te Lin even inserts a breakdown at the middle and end that’s all strange samples and noises. That’s something they did plenty of in their last album “Animals In The Room.”

Ma-Te Lin’s new album does struggle to keep the energy interest up at points. “CATerpillar” doesn’t feel like it needs to be six minutes long because it doesn’t do a lot. “沒有綿羊的草皮 Sheepless Grassland” eventually settles into a great groove but it takes a little too long to get there. “鹿的心 Deer’s Heart” gives off the rich feeling of being in a cafe on a rainy day. It should appeal to smooth jazz lovers and Lorde fans, but I regularly forget it’s on the album at all.

“嗨！又相遇了 HI! MATELIN” meets and exceeds most expectations the band sets. The band asks for more patience from the listener as they take longer to build. They’ve also dropped some of their darker sounds but they replaced them with fun sounds. It’s difficult to feel resentful toward an ultimately lighter and tighter album. Overall Ma-Te Lin proves they still have it.

A review of “People of the Dawn” by Spencer Zahn