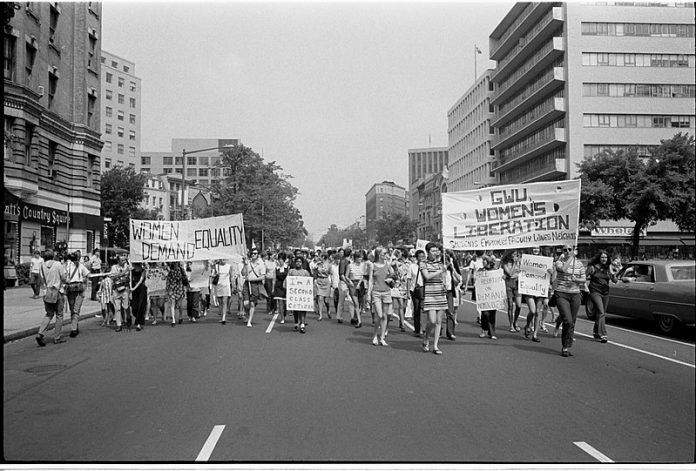 The recent wave of sexual assault allegations against famous and powerful men has provoked the resignation of senators, removal of movie stars from blockbuster films, and loss of congressional elections. The streak of accountability is a refreshing change after years of discourse undermining the accounts of victims. However, vindication in the media and public sphere does not directly translate to legal justice. Second-wave feminists won hard-fought legal battles to secure sexual harassment as a form of discrimination. While this legal framework was groundbreaking, it far from ensured safety in the workplace or changed the power dynamics that allows sexual harassment to proliferate.

Who coined the term “sexual harassment”?

The term sexual assault originated in 1975 when Carmita Wood, an administrative assistant at Cornell, filed a claim for unemployment benefits after quitting because her supervisor, Boyce McDaniel, groped her. She was denied unemployment benefits, but later formed a group  on campus with journalist, Lin Farley, called Working Women United. At the time there was no public discourse surrounding sexual harassment, let alone a legal framework to address it. Farley distributed pamphlets and surveys about sexual misconduct in the workplace, and the group unsurprisingly discovered that harassment was “epidemic.” Farley soon testified in front of the New York City Human Rights Commission, and over the next few years sexual harassment grew into a national conversation. By 1980 the Equal Employment Opportunity Commission had specified in their guidelines that sexual harassment was a form of discrimination prohibited by Title VII of the 1964 Civil Rights Act.

It was the efforts of black and working class women that pioneered the legal precedent during the late 1970’s. These precedents were upheld in 1986 by a groundbreaking supreme court case. Mechelle Vinson – a bank teller and one of many black plaintiffs in early sexual harassment cases – sued her supervisor, Sidney Taylor, after she was dismissed for taking excessive leaves. Vinson testified that her boss asked for sexual favors at work, forcibly raped her, and touched her in public. Though her case was returned to a lower court, the Supreme Court unanimously ruled that the conditions she endured constituted discrimination. The court’s determination rested on the EEOC’s guidelines, which “fully support the view that harassment leading to non-economic injury can violate Title VII.”

In 1988 a group of mining women filed the first class-action sexual harassment lawsuit against their employer after reporting a pattern of hostile behavior including stalking, intimidation, and groping from male coworkers. The case was significant because it was the first high profile case filed by a group of women and not a case of quid pro quo individual harassment. However, the mining company refused to settle the case, dragging it on for ten years. While the court sided with the plaintiffs, the case was emotionally damaging. Attorneys publicized the women’s personal information, delved into personal and sexual histories, and offered only a nominal settlement.

By the time Anita Hill was called to testify in the confirmation hearings of Clarence Thomas, there was significant legal precedent for sexual harassment cases. However, as Hill’s testimonies that brought sexual harassment into the national spotlight and launched a culture war. In nationally televised hearings, Hill accused Thomas of discussing pornography, sex, and his sexual preferences with her while she under him at the EEOC. This brought the issue of sexual harassment into American living rooms and to family dinner tables. Hill was deemed a liar, and Thomas was confirmed to the supreme court anyway. Pundits expected the grueling hearings to cause a significant drop in sexual assault cases.

And yet, the opposite happened. Instead, a cultural phenomenon took place – the “year of the woman.” In 1992, the number of women elected to congress more than doubled. Sexual harassment cases submitted to the EEOC – the very organization where Hill testified that Thomas harassed her – doubled between 1991 and 1998. Corporations took notice as victims of sexual harassment won a series of court victories and instituted training programs as well as policies to address harassment. However, what constituted a revolution for policy and legal precedent hardly led to a cultural one.

“Karoshi,” or how Japan works itself to death