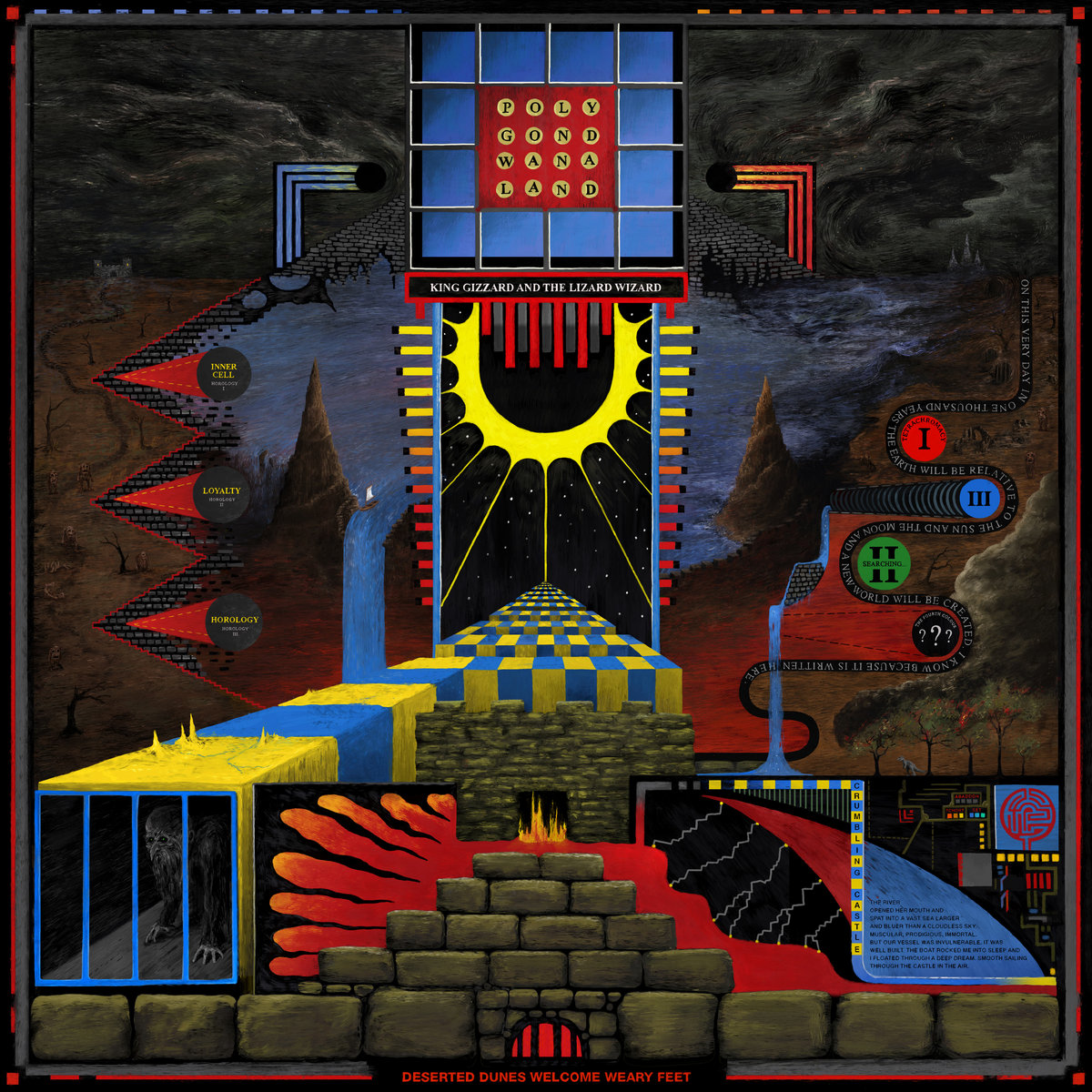 It doesn’t just cost zero dollars to have a digital copy, it is free for anyone to use however they like. King Gizzard & The Lizard Wizard didn’t want to go through the trouble of pressing vinyls and CD’s, so they let their fans do it for them. You can grab it on their Bandcamp and press it to vinyl, record it to cassette, copy it onto discs, put it on thumb drives littered in mysterious places around town, copy the liner notes onto small parchments attached the legs of carrier pigeons and more (some rights are reserved). Gizzard is a generous king.

“Polygondwanaland” plunges the listener into a magical fantasy land full of powerful and destructive figures and a hidden color that contains the secrets to the universe. It’s a progressive rock epic from front to back — radiating Jethro Tull and Rush in the best ways. The album opens with one of King Gizzard & The Lizard Wizard’s earlier singles, “Crumbling Castle.” At nearly 11 minutes, it sets a prog-ish and fantastical tone the album never drops.

In “Polygondwanaland” King Gizzard & The Lizard Wizard make a few interesting stylistic choices that do a lot for the album. First and probably most noticeable are the vocals. The band records two separate vocal tracks and layers them over each other pretty often. It can be subtle enough to miss, but the dual vocal tracks add a rich choral quality and power to the tracks. Given the album is a romp through a fantastical, dinosaur-filled land of magic, the choral quality fits very well. On top of that, King Gizzard & The Lizard Wizard sing on and off in an intensely staccato rhythm that puts a hard emphasis on the words. The singing style makes the words very stark, which helps draw out the story of the album. Not to mention, it sounds poetic because it fits common poetic meters where every other syllable is stressed.

King Gizzard & The Lizard Wizard vary their instrumentation as well, using a harmonica, flute, marimba and of course, synthesizers. All of these instruments fit well into the fantasy landscape the band creates on “Polygondwanaland.” Lighter woodwinds and percussion strengthen that link to old-school progressive rock as well, making the album sound all the more like a fun prog revival. The instrumentals also match the staccato vocals, playing shorter, quicker, and choppier rhythms.

The band mixes future and past in a prog rock way. The vocals distort and echo, synthesizers buzz and beep, yet a lot of guitar lines sound very twangy and acoustic. It’s a very good mix of artificial sounds that feel futuristic and visceral sounds that feel more dated. In prog rock and in “Polygondwandaland” it blends tunes attached to old world fantasy with tunes attached to new world psychedelia and sci-fi strangeness.

Across the album, it’s difficult to find much to pick at or complain about it. “Polygondwanaland” doesn’t hit every emotional note or fit every mood, but what it does, it does well. It sets out to create a psychedelic new world and a story within it. It’s a classic prog rock album reborn in the modern era. Like Rush’s “2112” it builds an imaginative setting for an imaginative story and uses that story to hits tons of different emotional notes (compare the mood of “Loyalty” and “Tetrachromacy” or “The Castle In The Air”) and styles without losing sense of the aesthetic that unifies everything.

The album never drops the act, never blinks, never gets confused and loses course. The sense of purpose and the way it delivers fully on the one note it chases down makes it excellent – – one of the better albums of 2017. If you like psychedelic rock, progressive rock, story-driven rock, “Polygondwanaland” is a must-listen. Even if prog rock and psych rock aren’t your cups of tea, it’s worth turning over once or twice. Why not listen? It’s free music.

At 58, Is Morrissey Relevant?