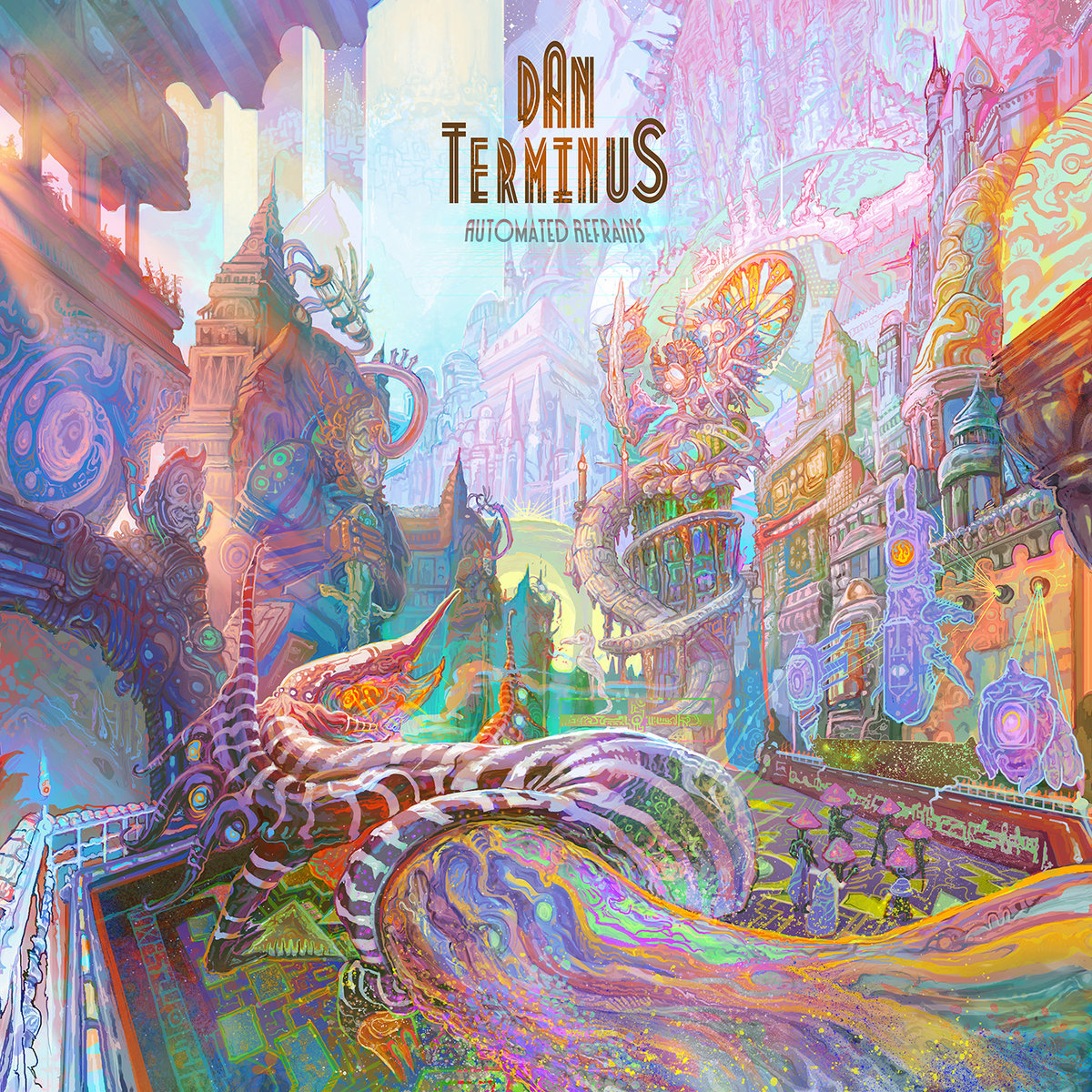 (The cover art for Dan Terminus’s new album “Automated Refrains.” Much like the album itself, the cover art is intricate, unique, and gives you a glimpse into a different world. The art was by made by Luca Carey, courtesy of Dan Terminus’s bandcamp page.)

What a year it is for synthwave – new projects from both Perturbator and Dan Terminus. For the uninitiated, synthwave is a French-dominated genre of electronic music that has built its own sound on the old musical tropes of 80’s movie soundtracks.

Terminus is a French artist who released his first album in 2014 and since then earned a spot as a synthwave mainstay. His 2015 album “Wrath of Code” turned a lot of heads with its heavy, rapid-fire beats that broke away from the stale compositions that made other synthwave acts boring. When I first listened to an Terminus’s new album “Automated Refrains,” I had feared he lost the energy and strong arrangements that drew me into his music. Yet, the new album grew on me. I grew to like “Automated Refrains” because of the album’s unique sounds, lighter tones, and sense of story that reminded me of progressive rock bands.

Listening to “Automated Refrains” I realized that I came to synthwave for almost exclusively the dark, melancholy, and sometimes intense tone found in things like Perturbator’s “New Model” or the soundtrack of “Blade Runner: 2049.”  Terminus moves away from perfecting those tones into making an album that explores a range of moods and ideas. Initially I felt annoyed at not getting what I expected, but gradually the changes he made to the genre in “Automated Refrains” felt refreshing.

After a few listens, my favorite tracks on “Automated Refrains” were the ones that broke away from the normal dark and heavy of synthwave. I’m convinced the light tones are where Dan Terminus shines and distinguishes himself on his new album.

“Friendship through Clear Plastic Walls” is a slow, seven and-a-half minute long song with the patience of a post-rock epic or a classical composition. It opens with a single electronic rhythm that feels super light due to how synthesized, high-pitched, and melodic it is. As the song moves it adds in more and more synth and bass. All of that falls off and into an atmospheric melody in the second half that uses a pan-flute, and a synth line with an odd, light twang.

“Friendship though Clear Plastic Walls” feels like a synthwave anomaly because it plays its composition very slowly and never falls into something loud and quick. The song is still interesting and full of movement but it doesn’t use its drops or its rises to move from melancholy to aggressive like most synthwave does. Getting used to it, it feels refreshing to hear the classic overly synthetic sound of the genre applied to a happier, lighter mood.

Even when “Automated Refrains” returns to genre-normal rapid-fire aggression and heavy melancholy, it does so in its own way. “Margaritifer” has the high-tempo, rapid-fire synth beats normal to synthwave, but it also drops in strange soundbites. There’s some cowbell, glitzy video game power up sounds, and this electronic sliding sound around 1:25 that feels Daft Punk adjacent. While the experimentation is interesting, it gets overwhelming too. There are elements I really like – – the way Terminus drops in noise samples like a lion roaring to hard-stop a beat for a split second is really cool and glitchy – – but there it feels overcooked because there’s so much thrown in.

The constant energy doesn’t tell as much of a story to me, and the story is a big strength of “Automated Refrains.” While a lot of synthwave aspires to tell stories – the genre is rooted in film – I never felt the world of a synthwave album as well as I did for “Automated Refrains.” Tracks like “Grimoire Blanc,” “Angelus,” “Electronic Snow,” and “Fall of the Ancient World” give me a better sense of story than other synthwave tracks because they’re more willing to move slowly and build atmosphere gradually. These tracks even use sounds more common to dungeon synth (an electronic genre meant to sound like a fantasy land) or new age music (there’s a surprising amount of flute on this album).

Overall, “Automated Refrains” is a solid and refreshing synthwave concept album that goes for light tones as much as it does heavy ones. It’s worth a listen for anyone interested in synthwave, in concept driven electronica, or experimental music. Terminus overshoots and undershoots his target at some points, but it feels like he wants to hit something unique. This album hyped me up for his future stuff because most of its problems felt due to experimentation. That’s a good sign. That’s much better than an album’s problems coming from a lack of trying, lack of ideas, or lack of identity. I’m already looking forward to what comes next from Dan Terminus.