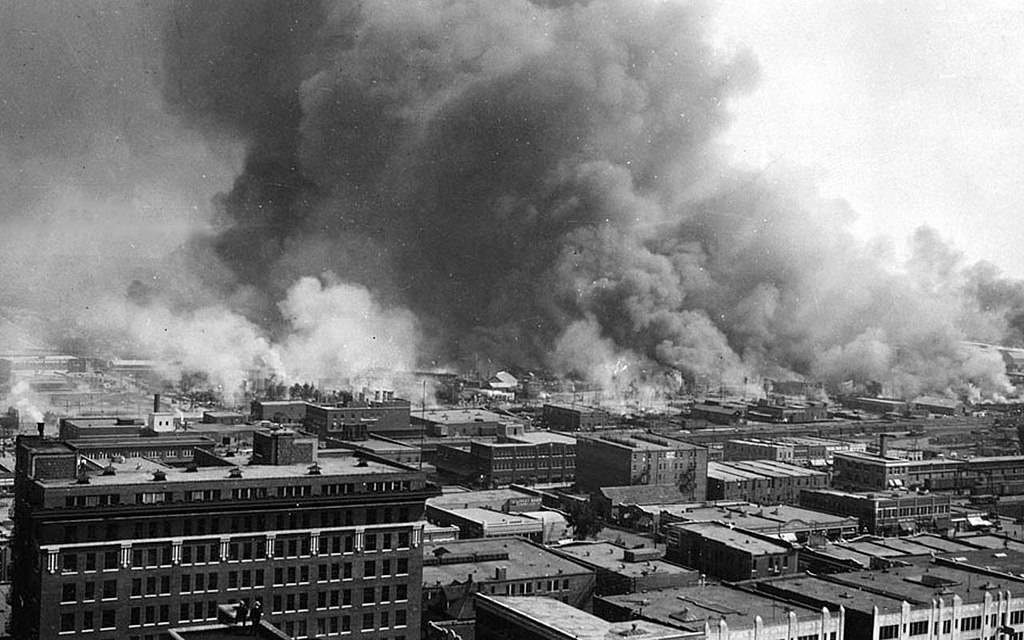 (Greenwood, 1921 – a wealthy and largely Black Tulsa neighborhood – up in flames due to the rioting of nearby white communities. Courtesy of Wikimedia Commons.)

Colonel, doctor, and writer Kathy Platoni asked what is left sacred in America. I can’t answer that, but I can say that some things are not and have never been sacred.

For Philando Castile, a black, 32-year-old public school worker, the drive home with his girlfriend was not sacred. He was shot seven times by a Minneapolis police officer who was acquitted of all charges.

For Eric Garner, a black, 43-year-old horticulturist and father, making peace in the neighborhood was not sacred. After breaking up a fight, he was shoved to the ground for knocking a police officer’s arm away from his body. An officer on scene strangled the life out of Garner while he said, “I can’t breathe” eleven times. The police officers involved were put on desk duty- -not even fired.

For Tamir Rice, also black, 12-years-old, playing with Airsoft guns in his neighborhood was not sacred. Because he reached for the Airsoft gun, he was shot dead by the police officer. Police on scene then forced his 14-year-old sister to the ground for trying to come to him. The police on scene did this before even attempting to treat Tamir. The police officer involved was fired, but not indicted for murdering a child.

For Trayvon Martin, black, a 17-year-old high school student who wanted to be a pilot, walking through his father’s fiancee’s neighborhood was not sacred. He was shot by a private citizen who confronted him on suspicion of a crime he had not committed. His shooter was found not guilty.

For the black citizens of the Greenwood neighborhood in Tulsa, Oklahoma, 1921, defending your neighbors and the due process of law was not sacred. A black boy was arrested for raping a white woman, but not convicted. The black community in Greenwood – –one of the wealthiest black communities in the nation ,came to prevent a white mob from taking him out of the jail and lynching him. When violence broke out ,the city sent planes leftover from World War I to bomb the neighborhood of Greenwood as white mobs rioted through it. No one was prosecuted.

For the black citizens of Cincinnati, Ohio, in 1829, living in the same city and competing for the same jobs as white people was not sacred. A mob of 300 white people not only forced the Black community in Cincinnati out of the city, but out of the country. Many fled to Canada.

Is nothing sacred? I can’t answer that question, but I can say there is a lot that isn’t sacred and hasn’t been for a long time. In America, the lives and livelihoods of minorities and outsiders have not been held sacred. Why should football be held sacred when the lives of human beings aren’t? If it takes disrupting a game to give attention to inhumane and routine lapses of justice then disrupt it. If it takes defiling the sacred in a sport to remind people of sacred lives being destroyed routinely, then defile it.

Taking a knee is not about the military, not about veterans, not about patriotism, not about nationalism, but very much about loving this country. Love is not blind like justice; love is not silent like a lamb; love does not let you sit complacent in your internal violence. Love  begs you to be better because it knows you can be. Love is what should be sacred in America.

With the blinders of nationalism and patriotism gone, maybe then people could see honestly all the things many countries never held sacred. Maybe then we would not say black lives matter, we would show it. Maybe then no one would take the knee because everyone would stand up for each other. Maybe then there would be no divide between self and other.

Neglecting a conversation about Aziz Ansari is dangerous