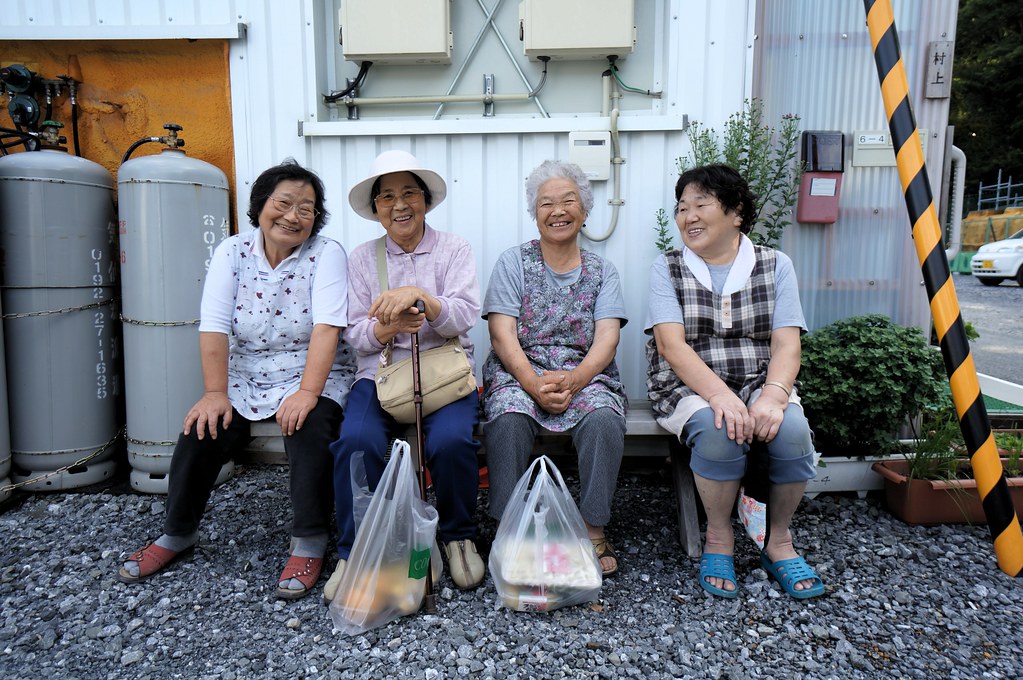 (Three tsunami survivors photographed in September 2013 by MrHicks46, courtesy of his Flickr page.)

How overworked are the Japanese people? They have a word for death by being overworked: “Karoshi.” A white paper published by the government of Japan claimed that 20 percent of employees faced the risk of dying from being overworked. Eighty hours of overtime work per month puts most people at a higher risk of dying –- be it from cardiac arrest, suicide, or another stress-related health issue. One in 5 Japanese workers push past that point. Japan’s problem is that karoshi might not only be hurting some workers, but the entire country.

Japan is in the midst of one of the greatest demographic crises ever seen. In short: Japan’s population is aging to the point where it is dying. In Japan, the work culture often crowds out socializing, one of the factors leading the birth rate to plummet. With no young to replace the old, Japan’s average age creeps upward and upward. All hard work and no play makes a country more than dull; it makes it shrink.

According to the World Economic Forum, In the last 5 years, Japan’s population has fallen by nearly 1 million people. According to the US Census, the population of the US has risen by over 10 million in the same time frame. Some demographic reports expect Japan’s population to fall by 40 million before 2060. The problem with a declining and aging population is that inevitably the old will outnumber the young. This creates an issue where a minority of society has to work to care for the the majority. As the old retire or can no longer work, the young have to pay taxes to cover their retirements, health costs, and more, unless the pattern changes. In Japan adult diapers already outsell baby diapers, so the pattern needs to change quickly.

Right now, Japan’s economy is in the longest period of sustained growth it has seen in a decade, but more work, more money, and more production might not take Japan off the track of a demographic collapse. In fact, as the GDP rose, births fell below one million in 2016. Some demographers, like Mikko Myrskyla, believe that as countries climb past a certain point of “human development” fertility starts to grow.

The issue is if these standards of human development take unreasonable work to achieve and maintain, then population growth is not feasible. In the case of Japan the workload for many is so heavy that death by work – Karoshi – is common. According to South China Morning Post, In 2015, the Japanese government recognized overwork as the cause for 93 suicides and suicide attempts. These cases led to compensation for the families of the victims, but there were 1,456 cases of Karoshi filed in 2015. There were only 1,576 filed all through 2005 and 2008. Some of the new cases may be people trying to play the system, but given how unlikely it is that the government accepts a death as Karoshi (93 out of 1,456), and how deeply the death of a loved one cuts, that isn’t the best explanation.

The better explanation is an intense Japanese work culture where supervisors shame those that don’t work overtime and young workers are afraid to leave before their bosses. The culture of work manifests in how Japanese citizens legally have 20 days of work off, but around 35 percent do not take any of it –-according to the BBC. Japan has trouble getting workers to take off work, which could point to a culture that places too much value on sheer effort and time spent on the job. Another sign of toxic work culture comes from employees working extensively off the record. The National Defence Counsel for Victims of Karoshi — a Japanese organization spreading awareness about Karoshi– found that many companies dodge labor laws by pushing employees to work off the record.

With work hours taking up so much of their lives, Japanese workers may reasonably feel they do not have enough left to give to a relationship or child. If death due to work is common, how much more common is a lack of life due to work? After working 100 hours of overtime in a month, how much time would anyone have left over to look for and maintain a romance? An article in The Atlantic also points out how steady growth and lots of jobs does not translate to a steady living either. Many younger Japanese men hold temporary positions that do not pay enough for them to start families.

Japanese Prime Minister Shinzo Abe has tried to do something about the slow death of his country, but much of his focus has been on generating growth. Abe recently passed a law limiting hours of overtime at 100, but critics have called it meaningless and even harmful- – an endorsement of an overtime load that can lead to death. The head of the National Defence Counsel for Victims of Karoshi complains that labor laws regularly lack teeth and so the true change would need to come in form of implementation and reinforcement of laws. Abe is a reformer who has gotten the country to grow, but for Japan that may not be enough. Japan’s government needs to prevent its work culture from killing workers before it kills the country, as well.