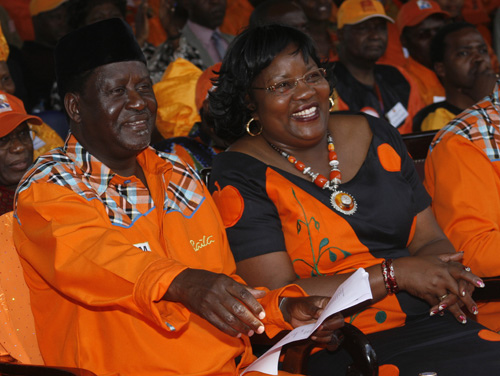 (Raila and Ida Odinga during a political rally in Nairobi, Kenya. Image courtesy of Wikimedia Commons.)

Kenya faces serious civil strife now that the main opposition candidate has withdrawn from the upcoming election. The nation had an election Aug. 8 that re-elected incumbent president Uhuru Kenyatta, but the opposition successfully challenged it in the country’s Supreme Court. Due to irregularities in the voting process, the Supreme Court overturned the election results and asked that another one be held. Opposition candidate Raila Odinga withdrew from this election in order to push the election process back about nine months and allow the time for the election infrastructure to be rebuilt.

Incumbent Kenyatta wants to push the election forward anyway, with or without Odinga. Provisions in the Kenyan Constitution stipulate returning to the nomination process and postponing the election for nine months if one of the candidates cannot run due to death or injury. By withdrawing and citing this provision, Odinga has sparked a debate on his country’s constitution. Kenyatta’s party seeks to dodge the constitutional issue by making a law that exempts withdrawals from the provision.

Odinga did not withdraw to spark a constitutional query as much as to get election reforms he sees necessary. The ruling party runs the electoral commission, the IEBC, and has not implemented the changes Odinga and the opposition party think are necessary for a fair election. The IEBC claims it has done enough to ensure the upcoming elections are fair. Odinga wants to see certain companies removed from the election process, but IEBC officials say they cannot break contracts with these companies. By withdrawing and creating a 9-month gap Odinga wants to give time to restructure the voting infrastructure that he believes nullified the last election. Odinga has other reasons to withdraw as well, which he released to reporters in Nairobi.

If the elections go forward, Odinga has called on his supporters to protest it. Kenya has had such protests before, which became bloody. After the August elections, at least 37 died and in 2007 some 1,400 people died in violence following the election of President Mwai Kibaki. That wave of violence even resulted in the International Criminal Court (ICC) indicting Kenyatta on crimes against humanity. The ICC claimed he and his current vice president, Ruto, helped orchestrate the violence. The charges have since been dropped due to eyewitnesses disappearing, lack of evidence, and diplomatic pressure from Kenya.

If Kenyatta takes a second term without actually facing Odinga there may be violence, but also uncertainty. Kevin Daly of Aberdeen Standard Investments points out that the uncertainty of legality and leaders in Kenya could hurt growth and investment. Kenya’s high growth rates are one of Kenyatta’s main achievements. To sustain them, he may either have to accept facing Odinga later, or facing wide protests sooner.

Historic resolution to “flights of death” trial in Argentina