I would like to say that I am shocked that James Mercer is partially behind Broken Bells, but I am nothing if not honest. It seems, for me, that James Mercer has become like a glitter mess. You knock the tub over and no matter how much time you spend cleaning, it keeps showing up. It’s stuck to your shoe, and in your hair, the rug gleams for weeks, everywhere you turn… glitter.

James Mercer has taken on so many roles, been part of so many bands. He has started side projects, reformed, renamed and disbanded groups so many times that it is impossible to keep up.

The Shins, the band for which he is most widely known, was formed as a side project while Mercer was in Flake Music. While in The Shins, he sang on Modest Mouse’s “We Were Dead Before the Ship Even Sank,” at the same time, he was working with Danger Mouse on a song for his album, while also forming their duo Broken Bells. And, while doing all of the above, he kicked everyone out of The Shins and started over, releasing “Heartworms” this winter.

Mercer has become to the alternative music world what Genghis Khan is to the general population, part of 1 out of every 200 songs. He meets someone, jams, releases an album and the alt-world eats it up, me included. Does he do it for the love of music? It is hard to tell. It seems like he just understands what will worm into the hearts of Alt-Rock fans. Despite my general distaste for the way he conducts himself personally, I love almost all the many musical endeavors that he comes up with, whether I know it or not. 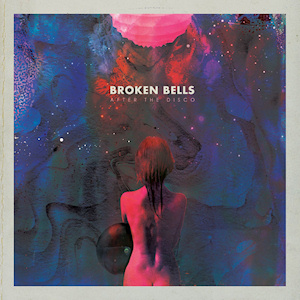 Alas, I reluctantly love Broken Bells, even since discovering that James Mercer was an integral cog in its formation. “The Remains of Rock & Roll” showed up on my Discover Weekly playlist and it reminded me how much I loved the 2014 album “After the Disco.” The album seems to embody the idiom “hindsight is 20-20.” Everything that was good about the music that preceded it is present in Broken Bells. It is everything that 80s music could have been. It mixes electronic with 70s style rock. Taking after its name, it is very disco, it is something you could roller skate to surrounded by neon. It sounds the way a lava lamp looks.

Everything Broken Bells released has a diverse collection of sounds, surprisingly, considering it is a duo. This could be in part, because Mercer is so prone to side projects. He has collaborated with so many other artists. And Danger Mouse aka Brian Burton’s  “associated acts” list almost doubles Mercer’s and includes being the other half of Gnarls Barkley with CeeLo Green and working with Norah Jones. Burton has producer credits on albums from some of the world’s favorite artists. Adele, Gorillaz, Electric Guest, ASAP Rocky, The Black Keys, just to name a few.

It’s frustrating, this album I love is just a side product to these artists who are effortlessly genius. We like to think the albums that are important to us are just as important to the artist.

At the same time, what is so frustrating, is what makes it so good. Burton and Mercer are good at making music, they have it down to a science. Broken Bells is not the home grown, starving, passionate mumblings of a struggling garage band that the alternative music world has come to love. It is the product of a couple of music geniuses. They came together from opposite sides of the music world to make a genetically perfect “alternative” album. The album feels like it’s an algorithm, but that’s what makes it good. That is just something I am going to have to live with.

Steely Dan and me: One for Walter