Andy Adamson’s new CD, “First Light” is a compilation of original music written years ago. The CD marks Adamson’s work with an ensemble of young musicians that help define the hard-driving sound of the release. The title track is an example of the band’s groove-inspired jazz.

Andy Adamson is a musician from Ann Arbor, Michigan. The keyboard player has more than 50 years of experience, starting with his first band in sixth grade. He is self-taught. However, his influences are among the world’s greatest musicians: John Coltrane and Chick Corea, for example.

Despite his early start and influences, as Adamson grew older, he played in a number of bands across genres and styles. Among Adamson’s work in other genres are jazz swing bands, Cuban folk music, funk, disco, and rock ‘n’ roll bands. The bands were based throughout the Detroit area, and Adamson no doubt benefitted from the city’s musical heritage and various outlets for musicians. Note: The Andy Adamson Quartet became a quintet with the addition of Ross Huff on trumpet.

The sound of Andy Adamson Quintet

Andy Adamson’s quintet features Adamson on keyboards, Dan Bennett on saxophone, Brennan Andes on bass, Jonathon Taylor on drums, and Ross Huff on trumpet. The other members of the group, while they haven’t been performing as long as Adamson, they certainly have the backgrounds to secure longevity in jazz, or perhaps other genres. Bennett, Huff, and Taylor all have BFAs in jazz or music composition. The members prove their commitment to jazz through their participation in side projects. All seem determined to work in music full time.

The group has an energetic sound with an easy groove that some listeners might associate with popular music. The feel, if not the sound, is like that of soft rock, but all the elements of jazz are present. The structure of songs around solos is a nice touch. Listeners become acquainted with the arrangement of each track, and the sound is clear enough that audiences can hear how each instrument is contributing to the song. 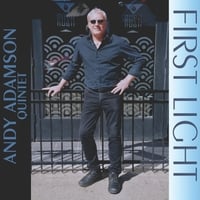 Keyboards and drums play off each other, until the keyboards break free into a spirited run. The understated bass mumbles in the background. The saxophone dominates until the keyboard solo. A lot goes on—two different keyboard lines, the satisfying crash and roll of drums. There are hints of rockabilly piano, the feverish playing of Jerry Lee Lewis, perhaps, just in the background. The saxophone solo soars and cries with abandon, and it is as if the other instruments are determined to intensify in their own ways to meet its fervor. The bass takes a small run toward the end of the song, and it sounds as if the song is over, then the drums play a motif, and then the song’s main groove returns for the end.

The theme of the song feels like joy and determination. When all the instruments finally slow down and shimmer their final notes, audiences feel as though something important has occurred.

Andy Adamson Quintet might be new to some listeners, but the members are not new to music. Some of the songs on the CD were written by Adamson more than three decades before. Regardless of their creation date, the songs have a vibe and groove that is appropriate for today’s jazz scene—making them proof of the adage “better late than never.”

The Cookers’ stir up jazz traditions with “Call of the Wild,...